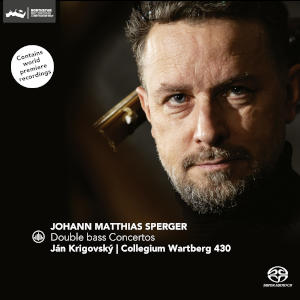 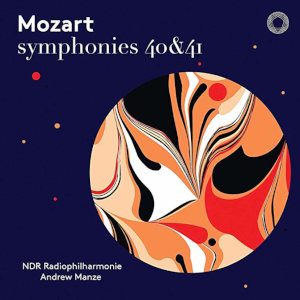 Considered to be the highest triumph of instrumental composition in his own day, Mozart’s final symphonies continue to sweep audiences away. From the famous G-minor opening movement of the 40th symphony that cuts straight to the chase to the unprecedented complexity of the 41st symphony’s majestic finale, Mozart displays his vivid melodic invention as well as the maturity of his “old” musical soul. Even if his untimely death came unexpectedly, these two symphonies fill the listener with a sense of culmination, and may be seen as a sublime conclusion of both Mozart’s musical development and of the eighteenth-century symphony in general.

These extraordinary works are performed here by the NDR Radiophilharmonie and Andrew Manze, and will be followed by a recording of Mozart’s 38th and 39th symphonies. With their first Mozart album, conductor and orchestra extend their successful PENTATONE discography that already contains the complete symphonies of Mendelssohn, crowned with a 2017 Jahrespreis der deutschen Schallplattenkritik.

A few months ago I was fortunate enough to attend a wonderfully invigorating performance of Mozart’s Jupiter Symphony conducted by Andrew Manze. The orchestra was the Royal Liverpool Philharmonic Orchestra whose superb playing on that occasion is mirrored here by that of the NDR Radio Philharmonie of which Andrew Manze is currently the chief conductor.

Though one can hardly deny that the world is short of recordings of Mozart’s penultimate and final symphonies, there is still room for more accounts of these two inexhaustible masterpieces, particularly when they are as finely performed and engineered as on this Pentatone SACD.

Manze’s accounts of both the G minor and Jupiter Symphonies are marked by the scrupulous attention to detail that is expected from this conductor and while these performances are free from any slavish adherence to period practice they are influenced by it in matters of tempi and scale. The outer movements are briskly paced, but the music is never too hard pressed, and there is a marvellous relaxed eloquence in the slow movements of both symphonies.

The playing of the Hanover based NDR Radio Philharmonie is a joy, with a freshness that is most appealing whether it be in the militaristic swagger of the trumpets or the beautifully articulated wind solos captured so vividly on this fine Pentatone recording. Manze’s generous repeats in both symphonies are also most welcome especially when the music making is as enthralling as here.

The recordings were made a year apart – Symphony 40 (21-24 February 2017), Symphony 41 (5-8 March 2018) – and while these are ‘live’ recordings they are free from any traces of an audience or applause. The spacious acoustic of the recording venue (the Große Sendesaal des Landesfunkhaus in Hanover) provides the necessary clarity and warmth to enhance the fine engineering of Daniel Kemper and his NDR colleagues.

Perceptive and well written liner notes by Mark Berry further enhance the desirability of this release and I look forward eagerly to the promised future issue of Symphonies 38 and 39 by these same artists.

Listening to snippets available on Presto Classical this one would have been a winner on all counts, with 38 & 39 still to come. However, visiting Pentatone's download website it says CD quality 44.1 / 16 PCM. For anything better: "Sorry, this file type is not available for download due to the recording quality". What a shame.

Presumably Adrian, this is a new DSD recording and not a re-hash from the archives so the Presto comment seems bizarre.

(Amazon.de shows the back side: PCM HiRes, Licenced by Studio Hamburg Enterprises).

Shame really as a really good DSD recording of these two popular symphonies is badly needed.

Nice review Graham that puts me in a quandary. Performance should always take precedence over recording but somehow I would sense being short-changed in settling for a very low frequency PCM recording from Pentatone of all people when there are very fine DSD versions already in our collection.