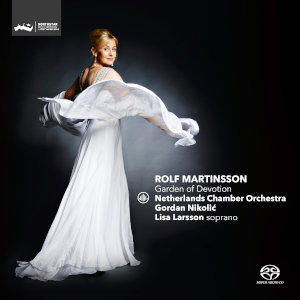 Martinsson: Garden of Devotion, A.S. in memoriam, To the Shadow of Reality, Landscape, Kalliope


Rolf Martinsson is one of Sweden's internationally leading composers. In this CD five works are gathered. One work is for soprano and string orchestra: Garden of Devotion is a collection of poems by Rabindranath Tagore set to music by Martinsson in 2013. In To the Shadow of Reality, the soprano is istead accompanied by string quartet in these five songs with lyrics by Swedish poetess Karin Boye.

A.S. in memoriam is a piece for string orchestra. Composed in 1999; it is a homage to Arnold Schoenberg. A piece called Landscape for solo violin is dated 2010 and takes its inspiration from The Strand, a painting by Edvard Munch. The disc closes with a work for chamber orchestra, Kalliope, composed in 2004.

A remarkable disc in several ways. Is Rolf Martinsson a contemporary Swedish composer with many faces?

Judging by his opus 97, ‘Garden of Devotion’, his oeuvre doesn’t seem to be as modernist as one might have supposed considering his age (born in 1956) and date of composition (2013). And it may furthermore strike as remarkable that poems from the Indian poet Rabindranath Tagore used for this song cycle are set in what sounds like American musical stage tunes. Not bad, just odd. The more so, because Martinsson tells the booklet’s note taker, Heinz Köhnen, that this present set is ‘my mature language of today’ and ‘completely different’ from the earlier 1988 ‘Martinsson modernism’ set. In fact, his previous opus 96, ‘To the Shadow of reality’, is also cast in a much more modern format. It opens up the question of which way he is going. More theatrical, more conventional (after all he is a teacher of composition) or is he a musical centipede able to explore different avenues on a case by case basis? A liberal, floating mind that cannot be caged?

This being so, I turned to the music ‘as is’, listening to the towering Cristal voice of Lisa Larsson carrying the five magical songs about ‘unrequited love’ to privileged heights, underpinned by the warm strings of The Netherlands Chamber Orchestra, fulfilling its stage orchestra’s role with verve and apparent pleasure. Everything works fine. No wonder: Both composer and dedicated soloist have been working together for a long time, whilst the optimum collaboration with the orchestra finds its origin from the time that Martinsson was Composer in Residence with The Netherlands Philharmonic Orchestra and The Netherlands Chamber Orchestra, both belonging to the same cultural entity. (It may be of interest to note that under the pressure of economics, the two orchestras share everything, including the concert venue, but the strings).

I’m sure that in Lisa Larsson’s interpretation of these five songs will win many hearts.

The other song cycle on disc ‘To the Shadow of reality’ follows, as said above, a more ‘traditional’ pattern in that the poems are Swedish, set to music for soprano and string quartet by a Swedish composer, in a more modern, yet reasonably accessible format. Like the former, it’s composed in close collaboration between Larsson and Martinsson and is, henceforth, perfectly tuned to Lisa’s voice and expressive talents. The same lyricism of the ‘Garden of Devotion’ is here more emotionally captured, becoming only apparent after several listening sessions and it is, therefore, as I see it, all the more rewarding to try to understand Martinson’s language. Gordan Nicoliƈ, the Orchestra’s leader and concertmaster, is joined here by first desk players Bas Treub (violin), Richard Wolfe (viola) and Sietse-Jan Weijenberg (cello), all of them fine musicians, ably assisting in shaping the intimate, yet at times expressive character of the cycle.

In between we have Martinsson best known composition, the ‘A.S. in Memoriam’ (1999) for string orchestra, which he wrote in remembrance of the death of Arnold Schönberg a hundred years previously. This is the World Premiere recording of the original version for small (15) string orchestra. Op. 50a (Op. 50b is the larger string orchestra version created in 2001). This is a core example of Martinson’s creative mind.

‘Landscape’ is a short piece for solo violin. The notes don’t say so, but it may safely be presumed that it is Gardan Nicoliƈ intriguingly painting the “the story where the waves, a beach and two different temperaments have important roles” as inspired by the Norwegian painter Edvard Much (the Beach). It is a demonstration of what’s possible and thanks to Nicoliƈ musically doable.

This brings us to ‘Kalliope’ a masterly crafted tribute to the nine ‘muses’, the Goddesses of Song. What I said in the beginning about being remarkable in several ways, comes to the fore in this final work, but in a different way. Not as regards interpretation, which is consistently high, but as it is recorded; more specifically in its surround mastering. All of a sudden the listener sits in a different hall or, literally spoken, placed in a different ‘surrounding’. Bert van der Wolf is famous for the natural quality of Northstar recordings, with just enough ambient sound to make the listener feel like having the best seat in the hall. The orchestra and soloist in front and coming from ‘surround’ the natural reflection of the walls, thus creating a three dimensional soundstage. However, not so in ‘Kalliope’. One wonders if this part has been engineered by different people, preferring a full surround sound picture, like 2L or even Tacet. Or has it been done deliberately by van der Wolf cs. to create the Goddesses omnium presence? It took me by surprise.