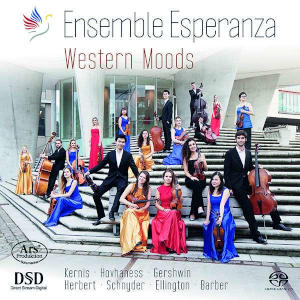 This is the third volume in a series of four, covering the quarters of the compass. So, East is still to come. I hold Ensemble Esperanza in high regard, and I’m not the only one: Since its foundation in 2015, they have been most successful on record (German Opus Klassik and Special Achievement Award ICMA) as well as in the Concert Hall (notably 4 sold-out concerts in the German Elbphilharmonie, Hamburg). Sufficient reason, therefore, to listen with much anticipation to this latest release and to discover what their ‘winds of the west’ have in store for us.

Reading the liner notes, one thing becomes abundantly clear: In comparison with previous issues this one is totally different. It is, in fact, quite unique. ‘Western Moods’ obliging? We have here a juxtaposition of traditional (Victor Herbert and Samuel Barber) and modern American composers, like Alan Hovhaness and Aaron Jay Kernis, mixed with the iconic George Gershwin, complemented by a series of arrangements from the Swiss saxophonist, Daniel Schnyder, now living in New York. Arrangements based on the brainchildren of such celebrity names as The Rolling Stones, Jimi Hendrix, and Duke Ellington, which admirably mirror the melting pot of sounds and styles from elsewhere North America is best known for.

Putting things to the test, I was a pleased to discover how easily the ensemble adapted themselves from the purely classical playing in the first two volumes to the jazzy elements of Schnyder’s arrangements in this present release. Shifting from soprano (Concerto from Nay) to tenor sax (In a Sentimental Mood) Schnyder managed to engage Chouchane Siranossian cs. in a surprisingly New World swinging action. I was struck, and Adolph Sax surely would have been happy to note, by Schnyder’s beautiful, classical tone and agile virtuosity, lending these short pieces a distinct classy appeal. One wonders though why his name isn’t mentioned on the cover page as a soloist in his own arrangements.

George Gershwin’s Lullaby, originally composed for string quartet, can be classified, as I’ve read somewhere, under the heading “Tasty Tunes and Delicious Harmonies”. If well played the listener risks falling asleep, as I did, listening at the end of a long day. The soothing tones of an exceptionally well-oiled string orchestra show yet again another face of American culture, as it does as well in Victor Herbert’s Three Pieces for String Orchestra. Herbert is a delightful salon composer from the end of the 19th century, mainly known for his Broadway Operettas. His works are easygoing and the musicality of these three pieces comes to life in a finely tuned orchestral palette of sweet remembrances of good times.

Further listening in reversed order, we get to the more modern and nowadays increasingly fashionable American, approachable, spiritually engaged composer, Alan Hovhaness, and the lesser-known, Aaron Kernis, with which Western Moods begins. The first part of Hovhaness’ suite In Memory of an Artist is one of extreme beauty, the ‘Fantasy on a Fourth’ begins with fragile rays of sunlight through the haze of early morning. At least that is how it arrived at me as a first impression. However, cosmic elements take over, creating immense tension in the violins, intertwined with soft celestial vibes and intense emotion in the middle and lower strings.

In fact, Chouchane Siranossian, the ensemble’s leader has Armenian roots. So, who would be more qualified to lead the players in Hovhaness’ exotic, Armenian memories, than she in the following mysteriously exotic Armenian short spirited allegro full of life and dished up to great perfection. The third movement starts with a surprise: Violins mimicking a swarm of humming bees (or any other flying bug) growing and going from ppp to fff and back again, part of more “spiritual murmurs” as Hovhaness calls them. Amazing!

Lots of new material, lots to relish and to go back to, over and over again. Indeed, the variety and high-class playing guarantee much enjoyment for diverging tastes and curious audiences prepared to go the extra mile in search of new musical avenues.

In spite of the complement having changed considerably since the previous volumes, I did not detect any difference in the Ensemble’s technical and musical affection: It still has the same youthful élan, the same clear desire for perfection and total commitment to whatever is on the menu. The inspirational input of their Concert Master, Siranossian, must undoubtedly have played a decisive role in maintaining the quality of the original, so very talented formation. Moreover, it would seem to me that the endless patience and insight of the sound engineers, Manfred Schumacher & Martin Rust, not only as regards the technicalities of the job, but also in relation to their musical ears, ably detecting even the minutest imperfection, must have been an equally crucial factor for the end result on record.

In this respect I may add that over the years the ARS production team have continuously shown a considerable commitment towards guiding and recording new talent, always drawing the best from all these young and coming musicians. For this reason, it is a pleasure to note that last month ARS Produktion obtained the 2019 ICMA ‘Label of the Year’ award (the Oscar of classical music).

As for the Ensemble Esperanza, it may be evident that they have now come of age. No longer is it ‘a project’ for promising young musicians in preparation for their own career, but a string orchestra in its own right that’s here to stay and, more importantly, that can easily measure up to the best and most experienced professional formations around, as proven with their splendid account of Barber’s Adagio, wrapping up a disk of considerable interest.

As usual, the recorded quality of ARS Produktion is of the highest attainable standard, albeit that there is often a tendency to emphasize the surround, putting the listener at the conductor’s rostrum, whilst many surround listeners prefer to sit at a certain distance in the hall. A solution is to tame in the surround speakers, but that is for high-end, well-calibrated audio set-ups no easy option. The soundscape is wide and deep, going vividly from the highest violin to the lowest bass.

Long may there be "a tendency to emphasise the surround". ARS Produktion are like a breath of fresh air in the midst of the vast desert of the concert hall ambience releases, all of which I find sadly lacking - one might as well listen to the stereo.

I would, incidentally, be very interested in hearing a surround mix conveying the sound as the conductor hears it. That would most surely mean the lead instruments in the rear speakers and the remainder towards the fronts. I have my loudspeakers set up as recommended by Wendy Carlos, with the rears aligned with the seat.

Good to hear you like surround so much. You are certainly not the only one.

I take note that your rear speakers are not behind but placed abreast of your listening position. It would mean that your surround is not full surround (if you know what I mean), making sense of your wish getting “the sound as the conductor hears it”. I wonder though if that is like hearing “the lead instruments in the rear speakers and the remainder towards the fronts”. One might argue that in order to conduct an orchestra all members should be able to see the conductor as he not only conducts with his baton, but using as well the expression on his face and sometimes even the rest of his body. For this he’ll need, as I see it, to stand in front of them. An exception would be if there is a piano soloist. The conductor will hear the piano from behind. But having the piano coming loud and clear from rear and the orchestra from the front risks tearing apart the soundstage. As I see it, ambience, if well judged, helps to create a three dimensional picture, not for upping the thrill. The idea that with such surround one might as well listen in stereo is not what I experience.

Anyway, views differ and I respect yours.