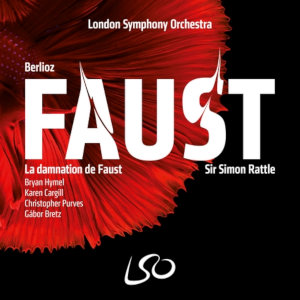 La damnation de Faust is a work born of the composer’s obsession with Goethe’s legendary tale. Once a righteous scholar, Faust allows himself to be corrupted by the devil, and drags the innocent around him into desperation and death. It’s a fable that defies definition – both a tragedy and dark comedy, with a central character both wise and despicable, and a play and epic poem in one.

Sir Simon Rattle says: 'This is a tribute to the Orchestra, and a tribute to Colin Davis. All of my generation learnt our Berlioz from Colin and the LSO. I've grown up with this music, and as a weird kid in the music library where my sister worked, the Berlioz Treatise on Instrumentation was one of my bibles.

We tend to forget how early Faust was started, Beethoven had just died when he made the first sketches, and the originality is still completely stunning to this day. The movement where Mephistopheles sings and the strings sound like a gigantic guitar, it's a sound such as no one else had even dreamt of making at that moment, and almost every other page there's a sound like that! You think, where does this come from? How did he even come across the idea that the orchestra could do that? It's the invention of the cinema. I think it was waiting for that. It's everything.

He wasn't a great man for categories, he was just expressing what he needed to express. Bless him for that freedom.'

Very interesting, has he actually recorded Bruckner before? Maybe during his time at Berlin? I don't check non SA-CD recordings.

He did a Bruckner 9, inclusive of a version of the finale made from sketches, with the Berlin PO.

And also Bruckner: Symphony No. 4 - Rattle

I am a bit puzzled about what is going on. The latest releases on this label do not seem to be being listed on this site. Further, Presto are listing them as CD only whilst Amazon and LSO Live have them as SACD???

I am very reluctant to criticise those who are running the site Gilbert but they do seem to be lagging behind other sites now with news of new releases whereas they were almost guaranteed to be the flag carrier a few years ago. This may be unfair; it could be the labels themselves that are not squaring the circle as they did.

Let’s get back to the music in question, Faust. I am fascinated by the story. We all have our dark moments of despair in life. Some may choose suicide; Faust certainly was close until he heard the church bells off in the distance. Most of us, as I have constantly reminded my children, wait it out until the darkness lifts. In my experience, it always does. Faust, however, chose to make a deal with the Devil.

The liner notes state that Berlioz did not want this piece to be a staged opera. Instead, he wanted the music to stir the audience’s imagination. It certainly does and I was very emotionally connected. This piece was on my wish list for some time. I finally downloaded it in DSD 64 multichannel. Sonics are excellent considering the venue, The Barbican. More interesting was the use of multiple choirs, so many in fact, that the boys’ choir and girls’ choir filled the isles. The music was recorded over two live performances (17 & 19 September, 2017).

I watched the entire performance on YouTube (longer than the two-hour recording because it includes the entrance plus the intermission) to get a sense of how they packed everyone in, especially the boys' and girls' choirs. I downloaded it so I could watch it without commercial interruptions. Sonics were not terrible considering it was YouTube. Also, I was very taken with the interactions of Faust and Mephistopheles. Apparently, The Metropolitan Opera did a concert version on February 8th, 2020, audio only. I do not have a subscription so I cannot evaluate it.

Reviews are excellent with a few notable quibbles over some of the soloists. Karen Cargill (mezzo), however, was very well regarded. Aside from the soloists, the Choirs are everywhere; I loved every moment of their singing. Conductor, Sir Simon Rattle choose a full modern orchestra rather than period pieces. I prefer it this way, powerful and dramatic. Singing was in French but there is an English translation in the liner notes. The story, the music and vocals are all epic. Multichannel will give you the full experience. There is so much here that I will have to listen to it several more times.

Are there better versions? Probably. But this one is recorded in high resolution for SACD. The sound engineering team of Jonathan Stokes and Neil Hutchinson (Classic Sound) did a great job mastering (should I say, containing) this huge orchestra and the many Choirs. A reviewer who attended the live performance said there were microphones literally everywhere. I am glad I purchased it and recommend it to you.