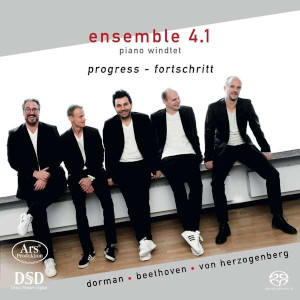 This one should do extremely well for several reasons: None of it is available in high resolution, not even Beethoven’s Wind Quintet; it gives, furthermore, a world premiere and a for many unknown Brahmsian masterpiece. And last but not least, it is performed by the Ensemble 4.1, also known under the inventive name of ‘The Piano Windtet’, with four seasoned wind players plus an experienced and, for all I know, a sought after accom-pianist. Hence, all the ingredients are in place for a closer look at this uncommon, yet most attractive menu.

Dorman’s 2007 Jerusalem Mix (Israeli fried meat dish) is, indeed, a world premiere. This Israeli composer now lives in the United States of America yet this work is, as the title suggests, particularly evocative of daily life in Jerusalem. It consists of five movements without pause. Dorman’s score requires five musicians giving expression to what lies at the heart of the various ethnical groups competing for existence, though mainly seen from a Jewish perspective. They do so with penetrating precision and in such a way that each of the ‘events of the day’, including a bomb blast, becomes breathtakingly visible. Accessible though it is, I find these 15 minutes a compelling and thought provoking document that will not fail to leave a lasting imprint of one of the world’s major modern, but largely politically unresolvable melting pots. It is good to have it on record.

To recover from these emotions we are allowed to land in Beethoven’s ever so popular Wind Quintet Op. 16, which is, as said above, thus far not available in Hi-res. It gets a wonderfully sparkling and colourful treatment, which shouldn’t surprise with such experienced musicians. Suffice it to say that it compares well with other (rbcd) recordings I have. All the more reason to give it a warm welcome.

The final piece is a true revelation. In recent years labels like CPO have revived the long forgotten composer Heinrich von Herzogenberg and much of his output is now available on record. However, his Quintet Op. 43 has somehow been overlooked until, in their (much needed!) search for new material, the Ensemble 4.1 rescued this jewel from oblivion.

Resemblance with Brahms is undeniable. It may not have the same profoundness, but it is all the same well-constructed and thoroughly enjoyable. All one needs are competent musicians to bring it to life. I won’t repeat myself, supposing that readers will know by now that everything in that department is as musically sound as sound can be.

All that rests is to give it a good listen whilst reading the interesting liner notes. The recording is well balanced and full of warm blooded sound, giving each instrument its proper due, putting the listener in a 180 degrees multi-channel soundstage.