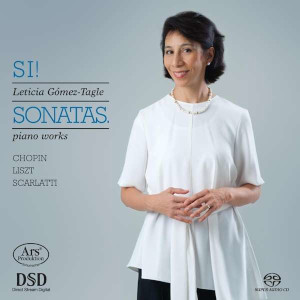 ‘The Mexican Chopin’, as Leticia Gómez-Tagle became known after winning the National Sala Chopin Competition in her home country, surprises with a lovingly played third piano sonata of her favourite composer: Chopin. Her performance, whilst not shunning spectacular virtuosity, is first and foremost characterized by her sense of melody and musicality. Rather than trying to impress with an obtrusively forceful interpretation she seeks to emulate the poetical and optimistic side of a composer, who, suffering from ailing health, was not quite prepared to admit as much in this ‘story of his life’ sonata. Seen in this light her reading is different, inward looking and probably best considered complementary to those solely striving for a place at the top; this is an alternative recording that can sit happily next to your other cherished ones.

Her choice for Liszt’s unique sonata seems a logical one as it is not only the other ‘most pianistic’ sonata of the romantic era, but also one of her fascination “since my early childhood” and hence part of Leticia’s mental luggage, now clearly ripe for recording. As in Chopin, her reading breathes a combination maturity and understanding of contradicting elements, in this particular case “between good and evil” - as she reminds us in her notes - without trying to over dramatize either. And in doing so, her performance wins in terms of truthfulness, laying bare the architectural structure and underlying complexities of Liszt’s state of mind; it’s more contemplating than just a show of brilliance.

To compensate for these emotionally laden interpretations Letitia Gómez-Tagle treats the listener with a delicious ‘petite’ sonata of the many Domenico Scarlatti left behind for eternity.

As for an explanation of the title ‘Si Sonatas I may, for brevity, refer to Ms Gómez-Tagle’s liner notes.