John Bacon-Shone is correct. Although not all of the rear covers for the Craft Recordings SACDs are included in the title details, the Contemporary SACDs that display a rear ... 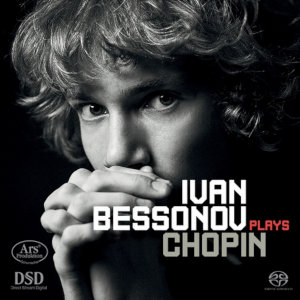 Every now and then ‘wunderkinder’ show up with a promise to become great artists. It looks as though the Russian Pianist/composer Ivan Bessonov is one of them. By being accepted aged 10 in the class of particularly gifted children of the Moscow Central Music School, he joined a small group of piano students being groomed for a bright future. Now, at the age of 16, with the Grand Prix of the Saint Petersburg International Chopin Piano Competition and other major prizes, as well as valuable concert experience in his bag, time has come for a debut SACD dedicated to his favourite composer, Chopin.

We have here a selection from his most loved works, like the Etude Op.10 No. 12, the Fantasie-impromptu Op. posth. 66, the ‘tragic’ Polonaise Op. 44, and the second Sonata with the famous March Funèbre, no doubt all chosen for giving ample room to express a comprehensive grasp on the various moods and technical demands Chopin’s oeuvre poses to an interpreter. And the recital concludes with three of Bessonov’s own compositions, each with a clear reference to Chopin: Two Waltzes - in A minor and B minor - and a piece called ‘Giraffe’ (inspired by Chopin's upright attic piano?).

At 16 one may perhaps not expect a level of maturity commensurate with full understanding of all the emotional factors hidden in these works. I won’t argue with that, but it took Chopin a turbulent life-time to deliver his spiritual output. What I found nonetheless most remarkable, and Bessonov confirms so in a personal note, that he, like - by the way - Chopin himself, dares to approach and perform each piece in the spirit of the moment. Sometimes hesitant as to give way to his feelings; sometimes with great energy, the Moscow piano school is famous for. In doing so, he apparently aimed at putting his own stamp on these well-known pieces, rather than just copying what others do.

It is too early to predict how high his star may rise. For the moment it would seem that Bessonov has more than sufficient scope to further develop and deepen his artistry, gaining more natural fluency in his playing, without losing the importance of keeping the overall tension going, regardless of ‘the spirit of the moment’. Indeed, talent needs to be nourished and encouraged to come to full bloom. With this recording, made in situ by the Russian sound engineer, Alexey Grigorev, and released by ARS Produktion, an important step has been set.

A rewarding debut with a programme that should appeal to all Chopin lovers eager to get some new views on well-known pieces. The sound is rich, but some may find it a shade too close.