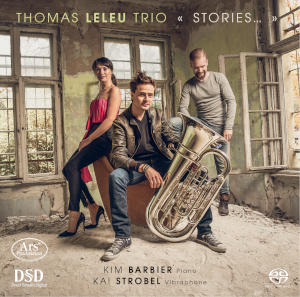 With a view to getting younger generations back to the classical concert scene, many orchestras, musicians and hall directors seek new directions. One of them being ‘crossover’. It’s a term used for a variety of more or less half way one and half way another musical expressions. Wikipedia suggests that “Crossover is a term applied to musical works or performers who appeal to different types of audience”, pointing out that it may have a negative connotation as well: “.. the dilution of a music's distinctive qualities to appeal to mass tastes”. I fear that no firm definition exists. However, the positive implication is that it opens the way to all sorts of experiments. Moreover, quoting Wikipedia once again: “Within the classical recording industry, the term "crossover" is applied particularly to classical artists' recordings of popular repertoire”. In this perspective this release is ‘crossover’.

There is no doubt whatsoever that Thomas Leleu is a tuba player of almost unlimited skills. He plays his instrument as though it is a baritone or euphonium. Already at the age of 19 he became solo tuba player of the Marseille Opera (Orchestre philharmonique de l’Opéra de Marseille, France), starting a rewarding international solo career in 2009. However, from 2012 onwards he decided to carve out something of his own: The Thomas Leleu Sextet (Tuba and String Quintet); tubaVScello (tuba and violoncello), followed 2017 by what is called ‘The Tuba’s Trip’ show revolving around World Music.

And now, here he is with his Thomas Leleu Trio, consisting of: Tuba, Thomas Leleu, Piano, Kim Barbier and Vibraphone, Kai Strobel, in a crowd funded debut SACD ‘Stories’ conceptualized under the supervision of the professional team for young and talented musicians ‘par excellence’, ARS Produktion, with Manfred Schumacher and Martin Rust as guarantors of a first class DSD recording. The soundstage is ‘roomy’, as will most probably be appreciated by many Jazz Combo and, indeed, crossover listeners.

In the first track “Stories mood’, Leleu demonstrates the sheer range he is able to draw from his instrument, humming, so it seems, a counter melody, followed by a Bach inspired preludium. But the bonanza of jazzy stuff starts in track 2. An attractive series of arrangements for his Trio, covering melodies from classical, semi-classical and popular composers, including some music of his own making. His Latin Suite is particularly remarkable, amply demonstrating in the first part (track 3) at what level his Tuba Genius has arrived. Many listeners probably won’t care whether it's labeled crossover or not and simply enjoy the music ‘as is’.

For any Tuba player a must and for the curious rest of us an unexpected, real pleasure.