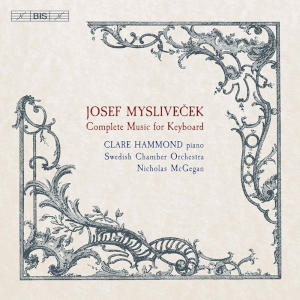 
Born in Prague in 1737, Josef Mysliveček spent most of his short life in Italy, where for a while he enjoyed success with his many operas, and became known as ‘Il Boemo’ (‘The Bohemian’). It was also in Italy – in Bologna – that he first met Mozart, in 1770. Their paths would cross again and in letters Mozart wrote about him with affection, describing him as full of ‘fire, spirit and life’. Mysliveček’s influence is apparent in Mozart’s early operas, violin concertos, symphonies and keyboard music. His music soon fell out of fashion, however, and it is only recent decades that have seen a growing interest in works such as the wind octets, violin concertos and symphonies.

In comparison, Mysliveček’s output for keyboard has been somewhat neglected, something which the English pianist Clare Hammond seeks to rectify with her latest disc. The keyboard concertos in particular have barely seen the light of day since Mysliveček’s death and the second concerto is recorded for the first time on this disc which gathers all of the extant keyboard works. Clare Hammond, whose imaginative recording projects on BIS have received international acclaim, is here supported in the concertos by the Swedish Chamber Orchestra, conducted by no one less than Nicholas McGegan, whose expertise in 18th-century style is undisputed.

At a time where the Super Audio market is served with a persistent flow of yesteryear's mainstream classics, carefully remastered and reissued in high resolution, BIS continues to surprise with releasing new and seldom played repertoire. Ever heard of Jozef Mysliveček? High time you do. Not quite the greatest of all composers, but a thoroughly enjoyable one, as I discovered when listening to another find of BIS, indisputably one of the more enterprising labels around.

Every period has its heroes, spreading their fame around, leaving little room for those who have to live in their shadow. The Bohemian born Mysliveček was such a person. Much liked in his own world for his crafty works, notably for his 28 or so Operas - his life in Italy obliging? - he disappeared into the background soon after his early death. For the full story I refer to the detailed liner notes.

What do we get? The complete keyboard works, with however one undated sonata, found in the Archivio e Museo della Badia of the Basilica Benedettina di San Pietro, Perugia, missing. The six ‘easy’ Divertimenti (mostly light and lyrical) and another easy six-pack with Lessons (somewhat more demanding) clearly having been written for amateurs and for (his) teaching purposes. The two concerti for harpsichord or forte-piano are little gems in a Haydn pre-Mozart genre. Indeed, some relation with the young Amadeus has existed and it is assumed that Mozart used some of his music as an example.

How are they played? So called second tier composers are best served by first tier interpreters. Clare Hammond, whose liner notes, referred to above, are most revealing, is, for me (but not for BIS) a new name. I understand that she is “recognised for the virtuosity and authority of her performances and has developed a reputation for brilliantly imaginative concert programmes’’, after winning, in 2016, the Royal Philharmonic Society’s Young Artist Award. Her playing is, indeed, impeccably stylish and delicate, and so is the disciplined accompaniment by Thomas Dausgaard’s Swedish Chamber Orchestra; this time under the inspiring baton of baroque specialist, Nicholas McGegan. The resulting degree of overall enjoyment is high. This is a most welcome addition to the Hi-Res catalogue, which will hopefully lead to more, like some of his many violin concerti (Mysliveček was, after all, a violinist) or a sample of his chamber works.

How does it sound? Well, need I say that we get here the usual high quality BIS PCM sound? Some are dismissive of PCM, but the skillful Take5 Music Production people know how to make it sound better than many a native DSD stamped recording. My only quibble: instead of using a forte-piano, choice was made in favour of a Steinway D Grand Piano. But by all means it doesn’t ruin any of your listening pleasure.