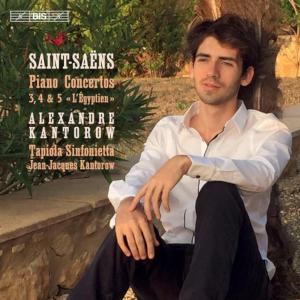 
Composer, piano virtuoso, conductor, teacher –Camille Saint-Saënswas all of these things, but also a keen archaeologist, astronomer, botanist, historian, illustrator, poet, playwright… A seasoned traveller, he was the most famous French musician in his own lifetime, acclaimed in North and South America, the Middle East and across Europe. It is ironic, then, that his extensive and varied output isn’t better known today – except for a few works of which the most famous, Carnival of the Animals, is one Saint-Saëns himself had little affection for. Now often regarded as old-fashioned or even reactionary, we tend to forget that Saint-Saëns during his lifetime was sometimes heckled for the boldness of his works. Furthermore, he defended the music of the revolutionaries Wagner and Liszt, earned the admiration of figures as Berlioz, Debussy and Ravel and – in 1908 – composed one of the first original scores for a film!

There seems to be some engineering problem with this recording. The high frequencies are too much to bear. I say this having listened to it on my mch system and also on my higher-quality 2-channel system. An Amazon reviewer states that it sounds worse than a typical CD. But most of my BIS SACDs sound great.

AS does this one to David.
Just listened to the Egyptian in MC.
A lovely recording in the Bis tradition.
It does have a nice open top end but it should not cause any problems on a properly set up system.
Incidentally, it's good to see the Egyptian becoming more popular and it gets a great performance from Kantorow.
Am surprised it has not been reviewed here.
Graham, Adrian where are you?

I agree with John on this, and was surprised by David’s judgement on the disc. I listened again to my copy in m.c. and it sounds excellent. The top end is transparent and translucent but there is a good balancing bass and big climaxes. All the reviews I could find were very flattering, with no one disliking the Sonics. Indeed David Hurwitz in Classics Today gave the Sonics a full 10/10, praising the ‘gorgeous engineering’. So David, either you have a rogue copy or you need to reconfigure your system. I suggest you try it on a friend’s system (just RBCD if necessary) or stream it from Spotify to get some idea. It really is a good recording.

Thanks for your comments, Phillip. I'll play the disk for my wife to get her opinion.
But I don't understand what John means by the "Egyptian".

The Egyptian is the nick name of the Fifth Piano Concerto David.
In the second movement I think there is a passage where the pianist plucks the strings of the piano instead of using the key board giving a distinctive sound.
It could be that that made you think the sound was strange.