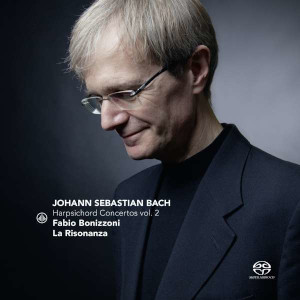 
Here is the follow-up to the critically acclaimed first volume of Bach’s Harpsichord Concertos by Fabio Bonizzoni and his group La Risonanza.

When is a set complete?

With Bach it is sometimes difficult to know whether a solo concerto set is really complete, if only because he often arranged or transposed the same score for various other instruments, like violin or oboe, and which are now catalogued under different BWV numbers. Taking this present ‘complete’ set in two volumes as an example, purists will say that it is not complete because No. 7 (BWV 1058) is missing. However, the same score is also and even best known as Bach’s first violin concerto (BWV 1041), in which case it would also qualify to figure in the complete set of violin concerti. I take it that for this reason it was left out. But things are not altogether that simple: Included in the set (Vol. I) is the harpsichord version (BWV 1057) of the fourth Brandenburg Concerto (BWV 1049).

Moreover, and to complicate things even further, transcriptions for other instruments do not always have a different BWV number (Concerto for three violins: BWV 1063R), whereas various reconstructed concerti, containing elements from different sources (I have 3 volumes of such solo concerti released by ‘Edition Bach Leipzig’ for the Capriccio label) have none at all. On this basis one cannot but conclude that cataloguing must have been a real head-ache for scholars and Bach’s Werke Verzeignis alike.

However, leaving such considerations aside, and respecting Bonizzoni’s choice, the big advantage for those opting for this set, is that sufficient room remained for including the popular Triple Concerto BWV 1044 and the first ever Harpsichord Concerto BWV 1050, like BWV 1057 belonging to the set of six Brandenburg Concerti (No. 5).

Apart from the 5 ‘one to a part’ musicians in the previous volume, Vol 2 needs additional musicians for BWV 1057 (two recorders), for BWV 1050 (traverso), as well as for BWV 1044 (traverso and an extra violin). That poses no problem as La Risonanza is a flexible group, able to adapt to multiple circumstances. For the record: Not just the 12 musicians shown on the photo on page 16 of the booklet, but, according to their website, they propose a much wider choice, also including brass instruments needed to cover most of the period repertoire.

In this second Volume, Fabio Bonizzoni and his musicians, confirm once more what a special position they occupy in the world of Baroque interpretations compared to the vast number of recordings of Bach’s keyboard concerti available in any format. Playing style and instruments are, by the looks and sound of it, thoroughly Baroque (see also cello position, photo pages 12/13). As I described in Vol. 1, their performances are ‘middle-of-the-road’ in a purely positive sense; not as slow as was customary in the middle of the past Century, nor as hectically nervous as in some recent versions. The latter may have their adamant followers, but risk in their brisk ambition to plaster over much detail of Bach’s ingenious harmonies and gripping melodies. Bonizzoni cs. deliver a most attractive compromise. Their judicious, yet attractively spirited approach follows, on the one hand, the more modern, historically informed trend, without trying, on the other, to be the ‘champ’of all versions, thus allowing the listener to follow, absorb and savour the full magic of Bach.

The recording was made in September 2018 in the recently renovated ninth century Roman church ‘San Donato’ at Polenta in the North Italian Province of Forli-Cesena. Taking into account the difficulties of recording under the aural constraints such a venue poses, the result is remarkably good, though favouring the lower end of the sound spectrum.

I think that we have here a set that is perhaps not as complete as one would have liked, but which has the not to be neglected advantage of two interesting bonus concerti, recorded with above average sound quality, in a reading that will please all those who prefer, above all, the performed quality of the music over some of the more spectacular but often less detailed readings around.