Hi everyone; long time. If I may make a correction. The Pentatone Steinbacher Vivaldi: Four Seasons to be released June 19 is a DSD recording. However, as stated by Gilbert, ... 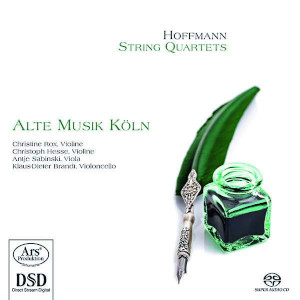 Do you have all of Haydn’s string quartets but would like to have more? Then this set may just be the one you’d be looking for.

I suppose that not many have heard of Heinrich Anton Hoffmann, neither did I. Nor did I know Alte Musik Köln. The liner notes reveal all sorts of interesting details about the composer, who, in his time, enjoyed wide recognition as violinist. But living, most unfortunately, in the shadow of the likes of Mozart, Haydn and Beethoven, his fame ended in the oblivion bin. Sadly so. Because these quartets are very good indeed. They may not have the genius of said masters, but they still are of an outstanding professional quality. Perfect craftsmanship I’d say. And I’m glad that ARS Produktion has recorded this set of three in this World Premiere production. A real scoop!

Similarly, the four musicians making up Alte Musik Köln, are most probably not common household names either, but some have been associated with such ensembles as Concerto Köln and L’arpa festante. Moreover, two of them (Rox & Brandt) have recorded duos of Hoffmann, also on the ARS Produktion label, under the name of Jansa Duo: Cyndi Lauper: She's So Unusual .

In this recording all four show themselves to be highly competent chamber players. I have greatly enjoyed listening to their inspired and delightful playing, conveying a degree of enthusiastic commitment one seldom comes across.

Rather than going into each and every detail, I’d like to commend this set to all those on the lookout for ‘new’ chamber music of the Haydn - early Beethoven era. This is wonderful stuff, wonderfully played and one can only hope the other set of three (Op. 7) is soon to follow.

The recording is lush and detailed. Well done!

Hi Adrian,
I am curious to know if this group plays in the “HIP” tradition or if they have a modern sound, using vibrato to sweeten the sound of stopped strings?

Thanks, Bruce, for guiding my attention back to this extraordinary disc. I just gave it another listen and can confirm that they play on period instruments and do use very little or no vibrato at all. A blindfolded recommendation.