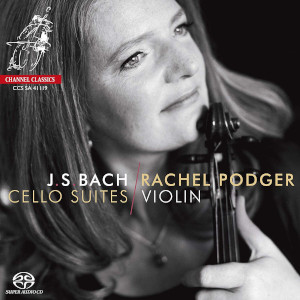 Bach’s 6 Suites for Solo Cello were composed in 1720 for the virtuoso cellist Ferdinand Christian Abel while the composer was in the service of Prince Leopold von Anhalt-Köthen. For more than a century they were considered to be academic studies rather than the works of miraculous invention and abundant beauty that we know today and as a result were quickly forgotten.

It is generally accepted that it was the great Catalan cellist Pablo Casals who, having recognized their greatness, restored these pieces back into the repertory and subsequently almost every distinguished cellist in the past hundred years has vied with one other to set down their own interpretation of these Suites. Rachel Podger has been described as the Casals of her time so it is not surprising that, having committed superb performances of Bach’s sonatas, partitas, violin concertos and much more to disc, she should turn her attention to the cello suites, and few would argue that the results of her efforts in transcribing these works for the violin is anything other than a triumphant success.

In the liner notes with this set Rachel Podger clearly identifies the main difference between performing the suites on a violin compared with a cello when she writes “With its smaller resonating body, the violin speaks more quickly and the immediacy of sound enables it to be more flexible, flighty and agile than the more circumspect and gravitational cello.”
She performs the first five Suites tuned to an octave and a fifth above their original pitch, but as the sixth Suite was written for a 5-string cello some compromise was necessary. After experimenting with a 5-string viola or violin she opted to use her own instrument and rely on the recording team to splice in the phrases impossible to play on her violin. As one would expect from musician and master technician Jared Sacks this has been done seamlessly.

Since the composer provided no tempo markings for any of the movements, the performer is free to decide upon the most suitable pulse for their interpretation and in these captivating readings the music breathes and flows effortlessly. Podger captures the improvisatory and sometimes playful nature of the preludes to each suite with characteristic brilliance, while in the dances that follow the fast movements are full of vitality while the slow ones flow with an engaging repose. With this artist one can almost take for granted the purity of the intonation and the technical mastery of her instrument but not the wonderfully delicate changes in nuances of phrasing and articulation that permeate every movement of these enthralling performances.

The recordings were made last year (2018) in the Angela Burgess Recital Hall at the Royal Academy of Music in London and thanks to the superb efforts of Producer Jonathan Freeman-Attwood and Recording engineer Jared Sacks, one’s listening room is transformed into that venue whose fine acoustic wonderfully enhances the sound of the violinist’s 1739 Pesarinius violin to glorious effect. Thanks to the immaculate quality of the 5.0 DSD multi-channel recording the sense of ‘being there’ is palpable.

While those wedded to their favourite performances on the cello by Fournier, Starker, Tortelier et al. are unlikely to cast them aside, Rachel Podger’s compelling versions offer new perspectives on these inexhaustible compositions and on both technical and artistic grounds will be a mandatory purchase for all who love Bach.