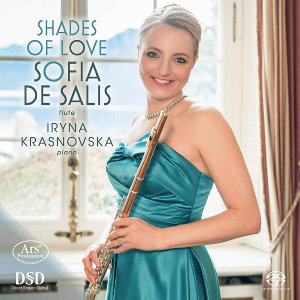 Who could possibly object to listening to ‘Shades of Love’ - taken from several familiar tunes in an arrangement for flute and piano - played so compellingly by flautist Sofia de Salis and her piano partner Iryna Krasnovska? Surely not me. The more so, taking into account that such a combination sounds so much more natural and warmer (piano) as well as soft-edged silvery (flute) if played back in DSD Super Audio surround format.

At the heart of these ‘shades’ are no doubt Schumann’s three Romances Op. 94, originally written for oboe and piano. But some of the other arrangements will also not fail to touch your senses in a lovingly fashion. Listen for instance to the first movement of Franck’s sonata. Balm for the soul.

That said I may be excused from dwelling too much on each and every composition in view of them being so generally known and widely appreciated (and in detail described in the liner notes), other than to say that all the arrangements are so well done that they sound as if they were the real thing, including Ms. De Salis’ own arrangement of ‘Ständchen’ from Schubert’s ‘Schwanengesang’, as well as the somewhat more complicated ones of his two, but lesser known ‘Wälzer’.

Focusing in turn my attention to the two artists, up till now unfamiliar names in my book, I have to admit that after my first round of listening they fully stood the test of professional and, indeed, musical competence as far as their respective ‘métier’ is concerned. Not just because the liner notes tell us that Sofia De Salis, a Moscow educated flautist of mixed Russian-Swiss descent, has already held several solo positions in notable orchestras, but more importantly because of the pleasant yet firm tone she seemingly effortless draws from her instrument; a clear sign of quality and mastering one only finds with the better players. And in Franck’s second movement, not quite the most ‘dreamy’ tune in these ‘shadows of love’, she excels in virtuosity and tone stability.

Her partner, the Swiss-Ukrainian pianist, Iryna Krasnovska, started her musical education at the Special Music School for Gifted Children in Kharkov, now, after Ukraine’s independence, called Kharkiv, followed by higher education at the Basel Academy of Music, one of Europe’s leading centers of classical music, of which she graduated with honours. On this disc she turned out to be an excellent accompanist. Supportive and balanced, expertly providing the musical fundament for these duets. Not surprisingly so. Education is one thing, practical experience another. Ms Krasnovska told me that she has a long standing ‘Lieder’ partnership with the Bulgarian Mezzo-Soprano Vesselina Kasarova giving concerts at festivals in Europe and elsewhere, notably South-Korea. This not only confirms her credentials as an accomplished accompanist, but I assume that she would also do wonderfully well as pianist in her own right.

In conclusion: We have here a recital which I, and possibly many others, regard as highly successful and … highly suitable for late evening candlelight listening with a glass of good wine, as it gives lots of lovingly played ‘shades of love’ to share. Lovers of romance and those who would want to relax after a hefty Mahler or Shostakovich symphony should seriously consider buying this one.