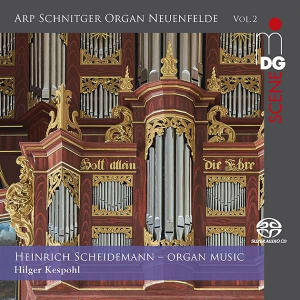 
Famous Elegance
Heinrich Scheidemann was highly esteemed already during his lifetime and so famous that he could afford to have a copperplate engraving made of his portrait. During the transition between the Renaissance and the Early Baroque he founded his fame above all on the elegant writing style of his compositions, which even today appeals to a broad public. Hilger Kespohl has selected works from the comprehensive oeuvre of this Hamburg master for the present Super Audio CD, and on the incomparable Arp Schnitger organ in Hamburg-Neuenfelde this richly varied musical portrait shines in all its glory.

Pious Balance
Scheidemann learned his trade from Sweelinck. Back in Hamburg, he combined his teacher’s secular tradition – in Calvinist Amsterdam, Sweelinck mostly performed concerts outside the liturgy – with the requirements of the Lutheran religious service. And so it is not surprising that Scheidemann above all produced works with liturgical associations. These chorale variations number among the first great highpoints in this genre.

Marvelous Resonance
However, Scheidemann also looked beyond the Hanseatic city’s borders: “intabulations,” transfers of motets by others to the organ, belonged to the duties of this church musician – just listen to the ravishing beauty of “Verbum caro factus est” after Hans Leo Hassler. His occupation with Dowland’s “Pavana Lachrimae” also displays an inquisitiveness far beyond the call of duty.

Meticulous Substance
This composition, in all likelihood intended more for home music performance, loses nothing of its intimate charm on the organ – a circumstance owing to the fine sense of sound with which Hilger Kespohl is able to show “his” Schnitger organ from its very best side. All the registrations are informatively documented in the booklet, and the meticulously produced 2+2+2 sound on this top quality Super Audio CD comes with a guarantee of listening pleasure for all those who love and enjoy audiophile recordings.