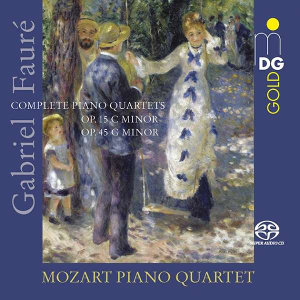 
First Impressions
Gabriel Fauré has frequently been termed “the father of Impressionism.” Why this is so is rendered very apparent on this state-of-the-art CD featuring interpretations of his two Piano Quartets by the superb Mozart Piano Quartet. With great virtuosity, a fine sense of sound, and an intelligent command of the complex overall structure, the four instrumentalists brighten the performance skies with their musical fireworks.

Parisian Fashion
The Parisian music world of Fauré’s time was characterized by emancipation from German hegemony in chamber music after the traumatic outcome of the Franco-Prussian War in 1871 and by the beginnings of an original French musical language beyond the opera. Fauré’s quartets draw formally on the tradition – and yet breathe a new spirit: church modes and whole-tone scales mark so many a motif, and here and there, along with the “classical” development of the themes, we also encounter entirely new harmonic fields and soundscapes.

Polyphonic Passion
In the outer movements Fauré shows himself from his Late Romantic and passionate sides: already the beginning impetuously rushes forward, but for all its passion it quite strictly and surprisingly follows the formal conventions in its polyphony. The Mozart Piano Quartet skillfully combines the traditional with the new; in three-dimensional sound the enormous dynamic expressive breadth of the ensemble develops its full potential. 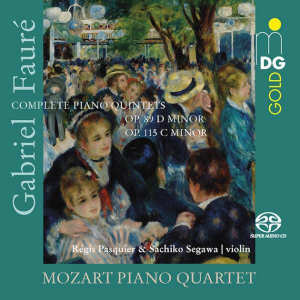