Additional info from Andreas K. Meyer: "I reference previous reissues based on what the client wishes to work against. That is usually the last reissue done as well as ... 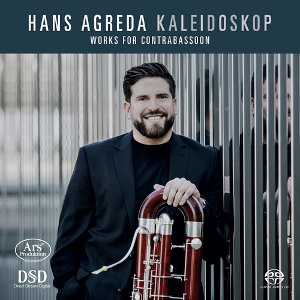 
On this production Hans Agreda shows impressively that the prejudices traditionally held against the contrabassoon are incorrect. With this recording he wants to break through boundaries and show positive perspectives. Indeed, the contrabassoon proves to be a concert and chamber music instrument that can also fulfil soloistic tasks as a matter of course.

About a year ago Manfred Schumacher and Martin Rust packed their recording equipment and set off to Zürich, Switzerland, to make a most unusual recording. Not because (almost) all of it is recorded for the first time, but rather because of the instrument in evidence: A Contrabassoon. It is usually hidden behind the strings at the low end of the woodwinds. And although already known in the Baroque era, it is now most of the time used in such massive works of the great symphonists like Tchaikovsky, Mahler and Shostakovich - to name but a few - to lend the bottom end extra punch, like tuba and contra bass. Solo works are rare and a solo concert even more.

The kaleidoscopic (Kaleidoskop on the title page) character of this release is not explained in the accompanying booklet, but as this notion refers to an instrument giving ‘a succession of changing phases or actions’, we may assume that it reflects here the varied collection of works. Indeed, this round-up of dedicated music covers a wide field of styles, whilst it is also true that these composers, having honoured the contrabassoon in their oeuvre, are not all of equal standing.

There is, however, one that - at least in my subjective view - stands out a mile above the crowd: The Dutch composer Kees Olthuis, whose ‘Introduction and Allegro’ for bassoon, contrabassoon and string quintet (2006) opens the programme. The now almost 80 years old Olthuis, having earned his daily bread as bassoonist in the Royal Concertgebouw Orchestra and the Netherlands Wind Ensemble, brings all his experience to bear in this and another, similar composition (see: Pro Contra! - Works for Bassoon & Contrabassoon - Van Holen) taking, according to the liner notes, also pride in composing for all sorts of events, including youth theatrical productions, often quite funny. Some of this humanely humorous side, reminding me of the style of Jean Françaix, shines through in his ‘Introduction and Allegro’, albeit in juxtaposition to a rather spookily sounding beginning.

Listening to it, I was immediately impressed. Not just because of the composition, but also the rest of it: the playing of the soloist Hans Agreda (supported by the beautiful tone of the bassoonist Matthias Racz and strings of the Tonhalle Orchestra) and, not in the least, the extraordinary quality of the sound. Depending on the quality of the play-back system, the double bassoon comes across in all its glory way down to the lowest of the lowest, without any hint of distortion. Altogether in such a superlative measure that I could and would easily have given six stars for music and the same for sound! However, in this site’s rating system that is not possible. And besides, in my overall judgement the ‘rule of the average’ applies.

The following various pieces for piano and contrabassoon (Deutschmann and Bruns) are all well-structured and are given an impeccable interpretation by the Venezuelan Hans Agreda (contrabassoon) and Ukrainian Anna Kirichenko (piano). But in terms of invention, they do not have the same impact as Olthuis’ composition. I’m nonetheless convinced that players of the bassoon family will love it and would want to have ‘m. And for the rest it is interesting fare, certainly for those who want to have a peek in the possibilities the contrabassoon offers.

Although playing a part in many composers’ orchestral scores, there are few solo concerti for the contrabassoon. Gunther Schuller wrote one and of Kalevi Aho a 2007 recorded version is available from BIS (RBCD). Reason enough, therefore, to welcome Victor Bruns contribution to this genre with his ‘Konzert für Kontrafagot und Orchester Op. 98, written in 1992 in a style that will appeal to a large audience because of its more or less melodious nature. However, in contrast to the other pieces, the surround is more pronounced, which is in itself not unreasonable and even appreciated by many, but there are moments that the orchestral front soundstage breaks up when, for instance, a xylophone jumps out to the left surround speaker. Seems a bit odd to me, but stereo listeners will not be bothered. The extensive liner notes, well worth reading, give the names of the participating members of the Zürcher Tonhalle Orchestra under the inspirational baton of Paulo Munoz-Toledo.

The final miniature ‘Soledad’ doesn’t sound as it was originally meant to, having been composed by the Uruguayan born Efrain Ochser for the theatre play “Monsters”, dealing with violence amongst youngsters. In the arrangement for contrabassoon, guitar and string quintet it rather comes across as a melancholically, Latin-American inspired balad, although the final chords convey, with demanding virtuosity from the solo player, a sense of unrest. The guitar, lovingly played by Emanuel Forni, adds that special South-American touch. A well-chosen work to round off the concert.

Agreda shows himself to be a wonderful contrabassoonist. His lows are clear tones and not, as with some lesser artists, just grumbles. I have taken much pleasure listening to this recorded adventure, which constitutes no doubt, like the one I referred to above, another must for bassoonists, whilst possibly being an eyeopener for many knowing little of this dark toned instrument, mostly living in the shadow and the depths of monumental symphonic and contemporary compositions.