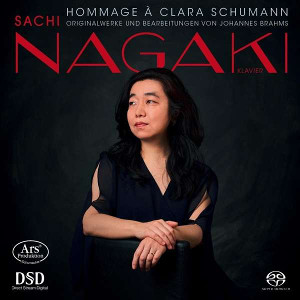 Many have speculated (and some still do) about the relation between Clara Schumann and Johannes Brahms. The Japanese born pianist, Sachi Nagaki, has made it the subject of her recent release with ARS Produktion: ‘Hommage à Clara Schumann’.

In the liner notes, Joachim Draheim (as translated by Claus-Dieter Hanauer), is quite outspoken on this issue, in that he negates it altogether:
“The countless, usually unfounded and sensation-seeking speculations regarding the nature of the relationship between Clara Schumann … and Johannes Brahms have unfortunately led to the fact that the unique character of this unusual artistic friendship has fallen into oblivion, a friendship that existed for more than 40 years - despite serious burdens - and developed into a mutually inspiring and fruitful spiritual partnership”.

Whether we agree or not – and I, for one, believe that love has many, and many different faces, reaching at its highest, positive level, the ultimate form of Intimate Friendship between people – fact remains that there has been is a strong artistic relationship between the two, resulting in numerous “original works and arrangements … composed for Clara Schumann or her children”, of which we find her an interesting anthology.

Coincidence or not, I find Nagaki’s interpretation of Brahms’ mature Fantasien Op. 116 lovingly feminine as regards conception and expression, also in those pieces demanding explicit energy and passion, as well as in the final Allegro Agitato. Possibly with the same affection as Clara Schumann would have played them. In doing so, she manages to touch a receptive vein in any keen listener; twenty plus minutes of pure joy.

The following piano transcript for the left hand of Bach’s Chaconne, a composer loved by both, is Brahms’ private gift to Clara, as is the second movement of his first String Sextet Op. 18 in an arrangement for two hands. Not an easy piece as Brahms tried to stay as close to the original, needing pianists with big hands to stretch larger than an octave. Clara, being a renowned concert pianist herself, apparently had. I don’t know how far Nakagi’s hands stretch, but in any case far enough to play it effortless and with the same dramatic involvement as obviously meant by the composer.

The Haydn Variations as played here, stem from a different source. The link with Clara is the original version for two hands, played together, and arranged for two by Ludwig Stark, a competent pianist/arranger but hardly known composer, dedicated to Brahms, supposing that it had met with his approval. Sachi Nakagi gives a flamboyant account of this well-structured version, which many, myself included, will now be able hear for the first time.

Other outsiders have contributed to this release as well, like Theodor Kirchner (Sandmänchen) and Robert Keller (Wiegenlied) with faithful arrangements or paraphrases for the piano of two Lieder composed for Clara's (and Robert’s) children and which are getting here a World Premiere. For more details I may refer to the liner notes.

It goes without saying that both pianist and publishers have enriched the catalogue with an immensely precious document that should be a must for all Brahms adepts, and of great interest and enjoyment of all other music lovers. The more so, taking into account that the recorded quality is of the usual high ARS Produktion’s standard.