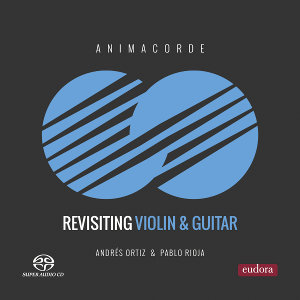 This disc came to life, or should I say: to full bloom, after having read the excellent essay by Javier Suarez-Pajares on "Revisiting Violin & Guitar", in a just as excellent an English translation by Susannah Howe. I therefore suggest prospective buyers do so as well before listening, it will assist in putting this programme into proper perspective.

It is not often that one hears duets for violin and guitar, the latter instrument largely having been replaced by an accompanying piano in the course of the 19th century. Like possibly many, I was familiar with some of Paganini's output, but not with most of the other composers, including Jacques Ibert. This being not Eudora’s first release of such a combination, I may refresh reader’s minds with this one Rebay: Violin & Viola sonatas - González, Álvarez, Riquelme, which I liked very much . So, another musical discovery trip appeared ahead of me.

Some years ago (2012) two artists, Andrés Ortiz (violin) and Pablo Rioja (guitar), joined forces under the name ‘Animacorde’ to “exploring the existing repertoire … and commissioning /premiering new works for this enormously versatile and attractive instrumental combination”. No explanation is given in the liner notes, but it would seem to me that Animacorde means something like ‘tied-up spirits’ or, more freely, ‘soul mates’. A befitting name for their common endeavour to attract and recreate interest in a combination of instruments that should do well in an intimate chamber music setting.

Once again, I was amazed to discover talent I wasn’t aware of. I think we all know that in Spain the guitar is a staple instrument and that many are able players, with some setting a level to which most classical acoustical guitar players elsewhere would like to be compared. Pablo Rioja is in that league. As to the violinist: Andrés Ortiz’s musical education is exemplary (Musik Hochshule, Detmold, Germany and the Guildhall School of Music and Drama, London, UK) and he’s also been around as a member of the Mahler Youth Orchestra. But isn’t the proof of the pudding in the eating, or rather in the hearing? Well, my own ears tell me that he is fine player with a sensitive tonal quality. In short: a perfect companion to Rioja’s guitar.

The music they play on this Super Audio debut disc (Ortiz appeared before in Hi-Res with his guitar duo partner Hermania Navarro in 19th Century Guitar Duos - L’Encouragement ) is a varied summary of their repertoire, covering compositions from Paganini’s Sonata Concertata MS 2 to Ibert’s short Entr’acte, the most recent composition of their survey, which will appeal to all lovers of Spanish music.

In conclusion: Take your time and enjoy. The recorded quality (original format DSD 256, 5.0) will not fail to enhance your listening experience.