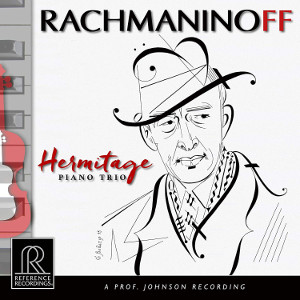 
The Hermitage Piano Trio is distinguished by its exuberant musicality, interpretative range, and sumptuous sound. Following a recent performance, The Washington Post raved that three of Russia's most spectacular young soloists turned in a performance of such power and sweeping passion that it left you nearly out of breath. Reference Recordings is proud to present their debut album as a Trio. A rarity in the chamber music world, this elite trio is comprised of three musicians who are noted soloists in their own right.

Hailed as a brilliant cellist by the legendary Mstislav Rostropovich, Sergey Antonov went on to prove his mentors proclamation when he became one of the youngest cellists ever awarded the gold medal at the world's premier musical contest, the quadrennial International Tchaikovsky Competition.

Pianist Ilya Kazantsev, a fresh and exciting presence on the international music scene and a passionate interpreter of his native Russian repertoire hailed by The Washington Post as virtually flawless has performed as recitalist and soloist with orchestras in Russia, Canada, Europe, and the United States. Among his many awards and honors, Mr. Kazantsev received first prize at the Nikolai Rubinstein International Competition (Paris) and a won the International Chopin Competition (Moscow) and the 2007 & 2008 World Piano Competitions (Cincinnati).

“I don't make recordings to be played on poor systems”. Famous words pronounced by Keith Johnson, way back in 1984 in an interview with J. Gordon Holt published in ‘Stereophile’. That was long before Super Audio emerged and many people had to do with ‘poor’ systems.

I have a number of older Prof. Johnson Digital Master Recordings, now stored in my ‘back catalogue’. The ones I particularly liked were Arnold Overtures, London Philharmonic, David Nolan (1991: Reference Recordings RR48), and the Weber/Brahms Clarinet Quartets with the versatile Eddy Daniels (clarinet) and the Composers String Quartet (1990: Reference Recordings RR 40). In those days his pure sound was a real improvement over the sometimes harsh and distorted ‘digital’ recordings by companies, clearly continuing to cater for ‘poor’ systems.

As the years went by systems became better and more affordable and It’s good to know that Keith Johnson is still going strong, still with Reference Recordings and still doing his thing. Not having had the chance to listen to one of Prof. Johnson newer, now 24-bit HDCD recording, I put this new release in my player with much anticipation. The first thing that struck me was that it produced a sound reminding me of my old LP’s (the thing now marketed under the name Vinyl) before they got scratched and grey. A natural, non-glaring, albeit perhaps a shade too soft-edged sound. I don’t know which equipment has been used, but one may assume that Mr Johnson hasn’t sit still over the years, constantly improving on his in house modified gear, remaining all the same faithful to his minimalist approach.

Needless to say that most members of and regular visitors to this site value sound quality, with all available dynamics, providing the best way to experience music in all its detail and to its fullest extent. It is, therefore, tempting to compare with RR’s Fresh! series, recorded by Soundmirror. And so I did. It led me to the conclusion that in large orchestral music Soundmirror is more engaging, realizing though that their multi-mike set-up, used in the way they do, that is: with great skill and musical feeling, thus adding another sumptuous layer to the overall listening experience. However, in this more intimate programme, Keith Johnson holds his place against improvements in sound recording elsewhere.

Of course, sound is one thing, musical content quite another. But both should go hand in hand. And as far as the musical content is concerned, I was pleased to discover that we have here three dyed-in-the-wool musicians having earned their laurels at prestigious podia. Not just because that is what it says in the liner notes, but, more importantly, what I had the pleasure to savour right from my first listening session.

Trios have little room for mistake. It’s only after gaining extended experience and having an almost sixth sense for what the other does or is about to do that playing together gets that fundamental input on which excellence can be built in a framework of mutual recognition. In this debut album, the Hermitage Piano Trio give ample proof that all accolades having come their way are true, painting with a perceptive but nonetheless firm brush a musical picture covering all shades from dark sienna to light blush. In both plaintive élégiaque trios, they play with such great and admirably sensitive passion, respecting not only the long melodic lines but also the sombre mood (especially in the second trio), as though the post-adolescent nostalgia of the Russian master had taken over their brains and veins. This is an account that pays tribute to him and creates delight for the listener.

Transliteration of Russian names remains a subject of prime interest for many scholars in different countries and from different language background. One can think of many ways to transliterate Рахма́нинов. Rachmaninoff is one of them and it’s probably more correct than Rachmaninov, especially if the man says so himself! But the French and the Germans have - as the (pronunciation) case may be - their own rules. For the listener, however, this does not change a iota. Music is a universal language and the Hermitage Piano Trio speak it wonderfully well.

And wasn’t it high time to have both trios on one disc with detailed, historically informed liner notes and, as the proverbial cherry on the cake, a fine Vocalise arrangement as a bonus? What more can one possibly ask for?

Thanks for your artful review which was most enjoyable to read. Reference Recordings are a must for my collection although I have never understood why they use two recording houses when one is so clearly far better than the other.

Twenty years into the format, it is high time that our collection was pruned, after all most of the core repertoire is available now from artistes that are best described as A Class,so many of the earlier SA-CD from more provincial, little known artists which were bought to plug gaps in the repertory are now no longer needed. Adding this disc to our collection is the last thing we needed but hey! ho! we'll start pruning maybe next year?

Interesting comments as regards the sound quality of various RR cd’s. Thanks for this. Although the Sound Mirror recordings for RR in dsd 256 sound very impressive indeed - listen for example to the various Manfred Honeck recordings (such as the Shostakovich symphony no 5) - some of the RR Eiji Oue recordings from many years ago are still magnificient sounding. Listen for example to the RR HRX 24/176.4 recordings of Respighi, Stravinsky and Rachmaninov and you will be blown away. Imho they still belong to the very best classical music recordings and I am not saying this lightly.