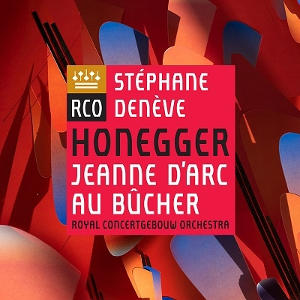 
Jeanne d'Arc au bûcher is one of the most inventive oratorios ever composed, constantly flitting between styles and colours. It follows the historic French heroine in the hours leading up to her execution. Indeed, the run-up to her death sentence is reconstructed as if in a crime novel. Paul Claudel's lively libretto contrasts Jeanne with an assorted lot of strange and wonderful characters. More than enough reason for Honegger to open up a colourful paintbox: the work features a succession of choral passages infused with spirituality, cubist-like blocks of sound and even bits of material reminiscent of the music hall. This is grist to conductor Stéphane Denève's mill, who is a leading authority on French music and a regular guest with the Royal Concertgebouw Orchestra; together with two choirs and a variety of soloists and actors, he realized a compelling and moving Jeanne d'Arc au bûcher.

This SACD of Honegger: Jeanne d'Arc au bûcher is a fabulous recording. According to the booklet, it is a 96 kHz PCM recording with Benchmark AD converters, live recording, 27 & 28 September 2018, Concertgebouw. The stereo version is available for download in 24/96 FLAC. I also ordered the SACD for multichannel. The reviews of this work are impressive: Gramophone "...for an audio-only Jeanne d’Arc, look no further." Erik Voermans, Parool “Unforgettable Jeanne d’Arc.” Martin Toet, Place de l’Opera “Rare inspiration in Honeggers Jeanne.” My parents were opera lovers and I grew up with opera. However, as a teenager I accidently stumbled on this opera/oratorio and fell in love with it. The power of the story is intense, Joan about to be burned at the stake. A savior of France and now a heretic. While it is in French, the booklet provides an English translation. All the elements are there for a superb recording, excellent orchestra, chorus and soloists. The horns provide that haunting effect throughout as the girl is condemned. There is sadness for sure as this is a true story. But, Honegger injects light hearted moments.

Give this one a good listen. I'm sure you will be impressed.

I've had an opportunity to listen to this work in SACD multichannel surround a couple of times. Credit to sound engineers Everett Porter and Lauran Jurrius. The soloists and chorus all come through clearly and are not drowned out by the orchestra. In fact, conductor Stéphane Denève does a great job making sure the orchestra and singers compliment one another to keep the emotional impact high. Soundstage is excellent and everyone is located easily as you hear the piece. I greatly prefer the multichannel version over stereo. Royal Concertgebouw Orchestra has put all the tracks on YouTube if you care to sample/listen. I highly recommend you watch a YouTube biography of Joan of Arc to understand the emotional complexity of the story.