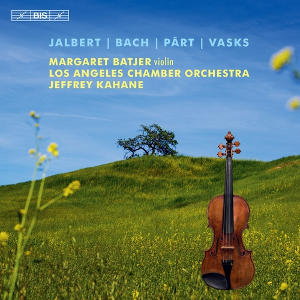 
Making their first appearance on BIS, Margaret Batjer and the Los Angeles Chamber Orchestra (LACO) cross great distances in both time and space in this programme of concertante violin works. The disc opens with a Violin Concerto by the American composer Pierre Jalbert (b. 1967), whose music has been described as ‘rich in instrumental colour and harmonically engaging’. Composed in 2017, the 26-minute concerto was a commission from the orchestra and here makes its first appearance on disc. The next work takes us to 18th-century Germany, where Johann Sebastian Bach had been busy studying the concertos of his Italian colleagues, and especially Vivaldi. His Concerto in A minor is thought to have been composed around 1730, at a time when Bach had freed himself from his models, producing works richer in both texture and sentiment.

For the second half of the programme we return to our own time, travelling northwards to the Baltic countries, as Bach is followed by one of his great admirers in modern music, the Estonian composer Arvo Pärt(b. 1935). Margaret Batjer and the orchestra offer us their performance of what is probably Pärt’s most famous piece, Fratres from 1977. Originally written for chamber ensemble ‘without fixed instrumentation’, it soon became a modern classic and exists in numerous versions. The one heard here, for violin, string orchestra and percussion, was made by the composer in 1992. The closing Lonely Angel is by Pärt’s slightly younger colleague Peteris Vasks (b. 1946) from Latvia. Reworked from a movement for string quartet, the piece was inspired by a particular image: ‘I saw an angel, flying over the world; the angel looks at the world’s condition with grieving eyes, but an almost imperceptible, loving touch of the angel’s wings brings comfort…’