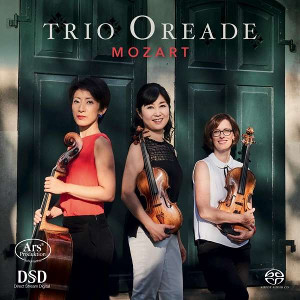 Whoever wants a decent rendition of Mozart’s seldom played String Trio fragment KV 562E/Anh 66 will find it here. And whoever wants to hear Mozart’s Divertimento KV 653 played in the spirit of the age should listen to the rest.

To deal with the fragment first, it is one of the many unfinished works Mozart left behind. It was published for the first time in 1975, and is played here as completed by Franz Beyer. Köchel, the man who created order in Mozart’s compositions, numbered this undated score as though it must have been written around the same time as his Divertimento in E-flat, i.e. in 1788. It is therefore an approprate 'filler'. By the way, completed doesn’t mean completed. The fragment ends as abruptly as left by Mozart. As far as I know, Beyer’s contribution serves to make it playable for a string trio.

The main item is, of course, the Divertimento. It is the second recording in high definition that has emerged in a short time. Assumingly part of a renewed interest in Mozart’s chamber oeuvre, especially all that’s designed to entertain audiences. Out of nearly 30, this Divertimento is, beyond any doubt, its most outstanding example. According to some scholars it was written to please Herr Puchberg (Michael Puchberg, an Austrian businessman and friend of Mozart’s) and offered to be played during a ‘social gathering’ at his residence. However, it didn’t happen. It is even not sure that the trio he mentioned on the subject in a letter to his sister, is this one. It could as well have been his Piano Trio in G-Dur KV 564, or any other written in the same year (1788).

Ursula Sarnthein, the viola player, does not dwell on it, but gives in her liner notes -well worth reading- some interesting ideas about what could have been Mozart’s reasoning behind the nature and purpose of the composition, giving furthermore detailed information about each of its six movements.

In my view, Mozart is probably one of best pop composers history knows. And although, in his time, others, like Ignace Pleyel, topped the hit parade, Wolfgang’s more inventive ideas have, over the years, become ‘evergreens’, winning the day in our time.

Interestingly, the introductory liner notes make reference to a letter Amadeus wrote to his father Leopold saying: “To win applause one must write stuff so simple that a coachman may sing it, or so unintelligible that it pleases precisely because no sensible man can understand it”. A well-chosen quote I'd say, as it comprehensively underlines the difference between the ‘coachman’ scores of the Pleyels of this world and Mozart’s master pieces able to stand the test of time. It would seem to me that the Divertimento in E-flat Major is the pinnacle of Mozart’s divertimenti and other works to please nobility. It brings seriously sophisticated entertainment at the highest level to the experienced ear. That said, and rather than trying to find out the why and how of things, I suggest listeners focus on the music ‘as is’. Charm will be your reward.

The Swiss Trio Oreade (two being members of the Zürich Tonhalle Orchestra), tackle the Divertimento in what they call “an authentic, lively interpretation” based upon the concept as written down by Johann Georg Sulzer (1721-83). And I quote the following from the liner notes: … “It goes without saying that reading the notes correctly does not suffice … He (the artist) will drag some notes (legato), repel others (detached), some notes will tremble (vibrato), others will be held; at times diminishing the tone, and at times augmenting it”.

From that it may be clear that the three strings of the Trio Oreade (Yukiko Ishibashi, violin, Ursula Sarnthein, viola, Christine Hu, violoncello) play it differently than the recent BIS release with Zimmermann cs.: Mozart: Divertimento - Trio Zimmermann, making any direct comparison hazardous. The upshot, however, is that Trio Zimmermann play all the notes correctly, with pure perfectionism and professional elegance, whereas Trio Oreade may at times be less precise but create, indeed, a livelier picture and are perhaps a shade or two more humane. The recorded quality in both cases being exemplary, the choice becomes largely a matter of taste and whether or not one wants the highest degree concert hall perfectionism, or a warmly intimate invitation in your own environment.

For many, the culminating point will be the second movement (Adagio), wiping out all listeners’ sorrows of daily existence. Trio Oreade is here at its best. Finely tuned involvement, immensely delicate, offering balm for the soul without becoming melodramatic.

Trio Oreade ought to be congratulated for their performance, played on period instruments (on loan from the Stradivari Foundation Habisreutinger), expertly captured in the ‘Kulturzentrum Immanuel’ in Wuppertal, Germany, in High Resolution and set in Realistic Surround by Manfred Schumacher. All in all: A real source of inspiration.