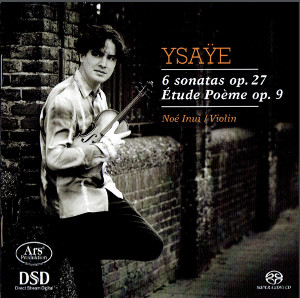 This is the second time in a relatively short period that a Belgian born violinist recorded for the ARS Produktion label Ysaÿe’s six Sonatas for solo violin. This time it's Noé Inui, of Japanese-Greek descent, who attracts our attention to a set that should not be absent from anyone’s SACD shelves, thus offering a further choice amongst available readings.

In that respect I may recall what I said in my review of Stefan Tarara: Ysaye: 6 Sonatas for Violin Solo - Tarara: “often young violinists take on these solo sonatas as a means of catapulting themselves into the top echelon in a crowded field of fine fiddlers. If successful and attracting sufficient attention, it may indeed open the door to the Hall of Fame”.

While verbally taking distance from using these sonatas as “a measure of technical accomplishment in the great international competitions”, Inui’s reading seems nonetheless more glamorously inclined than Tarara’s. Let me put it this way: If Tarara’s is a Rolls Royce, then Inui’s is a Maserati. He plays all six of these devilishly difficult sonatas with such an incredible speed that he even makes the likes of Thomas Zehetmaier blush. This is a virtuoso reading by someone, who, and I quote from his notes: “almost make me believe in a destiny that has linked me to ‘Eugène the Magnificent’”.

In order to give his recital a special character, Inui has two more symbols upon his sleeve: Pierre Guillaume, archetier (bow maker) of Maison Bertrand at Brussels, Belgium, was kind enough to lend him the Suntory bow Ysaÿe received as a gift from the Belgian Queen, Elisabeth, while his colleague of the same House -the oldest ‘Lutherie’ on the European Continent- luthier (violin builder) Jan Strick, provided him with a copy of the e-string, the so called ‘chantarelle’, Ysaÿe used.

Putting things to the test, I found it difficult to detect to what extent any tonal difference could be attributed to the use of either bow or e-string. In comparison with Tarara’s performance Inui’s tone struck me as more powerful but not more beautiful or pure. Inui undeniably has the technical skill to deliver an admirable account of the sonatas, but so has Tarara, though at a more considered speed, leaving him sufficient time to delve deeper into the musical values.

As the liner notes don’t give any information about Ysaÿe’s intentions behind each of the six sonatas, I’ll repeat here what I said elsewhere: “.. for those largely unfamiliar with Ysaye’s solo violin sonatas, suffice it to say that they were written and dedicated to six of the most important and befriended violinists of the time, like Joseph Szigeti, Georges Enesco, Fritz Kreisler and two more or less forgotten ones: Crickboom and Quiroga, whereby style and repertoire of each is embodied in the respective sonata. For instance, in the second sonata one immediately hears its relation with Johann Sebastian Bach (Partita BWV 1006 and, - though nowhere mentioned - Cantata BWV 80 ‘Ein feste Burg ist unser Gott’), who’s compositional style Ysaÿe has taken as model, or rather, source of inspiration”.

Apart from the sonatas, Inui offers something Tarara doesn’t: Ysaÿe’s Étude-poème Op. 9, in a world premiere recording, with a very supportive Mario Häring at the piano. According to Marie Cornaz of the Royal Library of Belgium, this étude is part of 4 études-poèmes written between June 1900 and September 1901, of which three have been published after the composer’s death by his grandson, leaving one “written in the Summer of 1900”, that is the one recorded here, unpublished. On the basis of these and other pertinent details, I take it that proper research has been done, but I wonder how it is possible that opus 9 was written in 1900 when opus 10 dates from 1884. Furthermore, that on the facsimile of (a part of) the score (see page 13 of the booklet) dated Nov. 1900 is written ‘Etude Poème no. 6’, whilst there is no mention of an opus number. Moreover, The Petrucci Music Library (IMSLP) lists all the works of Ysaÿe (source Oxford Music Online) starting with Opus 10 (numbers 1 to 9 marked with ‘?’). But it does list an étude-poème for violin and piano without opus number. A mystery? Intriguing though it all may be, we must be grateful to have now a ‘forgotten’ piece of Ysaÿe’s work on record.

Admirers of self-confident bravura and symbolism will find much to enjoy in Noé Inui’s account of these wonderful sonatas, others might prefer Stefan Tarara’s excellent, more considered musical reading.