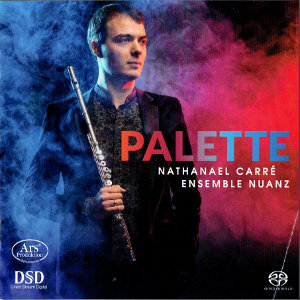 Ensemble Nuanz is composed of musicians drawn from the Stuttgart State Orchestra, based at and rendering service to the State Opera Stuttgart, Germany, of which their soloist/arranger, Nathanael Carré, is solo flautist. The beauty of it is that they know one another very well, thus contributing largely to the perfection of their playing. It would seem that because of Carré’s roots, choices for the entire programme ‘For Flute and String Sextet’ is one hundred per cent French: With mainly a collection of arranged short pieces, leaning towards Salon Orchestra style with a modernist and virtuoso exotic lining.

As with so many other recordings made at the ARS Produktion in Wuppertal (Kulturzentrum Immanuel) this release was made possible with generous support of family, friends, institutions and other supporters, giving musicians a fair chance to show what they are capable of doing: Reaching out to a large public with an attractive mixture demonstrating that so called ‘tutti’ musicians are just as professional as those higher up in the echelon.

I’ve greatly enjoyed this musical meal, dished up with care and taste, and above all, recorded in the impeccable way the ARS Produktion team have so successfully put many young and hardly known musicians in the lime light on their way to prizes and subsequent fame.