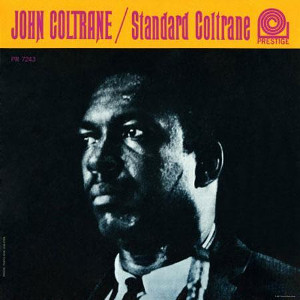 
Part of the ultimate audiophile Prestige stereo reissues from Analogue Productions — 25 of the most collectible, rarest, most audiophile-sounding Rudy Van Gelder recordings ever made. All cut at 33 1/3 and also released on Hybrid SACD

“The title could not have been more accurate. By 1962, Coltrane’s leadership role was undeniable; he was a standard-bearer of musical commitment, and intense, bold exploration. As well, all four tunes on the album were truly ‘standards’: 32-bar tunes originally crafted for Broadway or Hollywood projects, adopted by jazz instrumentalists to interpret and explore. There’s another meaning to be gleaned from the album’s title. In 1958, when Coltrane recorded the tracks, he often favored melodies that had attained popularity during his teen years—familiar and unfamiliar alike—all in a search to find new structures and fresh inspiration. This indeed was standard Coltrane—in ’58, and well into the ’60s.” — All Music Guide

This is the second time AP have issued a SACD transfer of this title. Curiously this one has the same catalogue number (but a different prefix) as the first one from well over a decade ago. I wonder if Mark (or anyone else!) has any insider info on it - presumably it isn't just a straight reissue of the earlier transfer?

Analogue Productions' SACD John Coltrane: Standard Coltrane (Analogue Productions APJ 7243) was remastered by Doug Sax. This current release is part of the Prestige Stereo SACD and LP reissue series, and all of these titles were remastered by Kevin Gray. The recent Prestige Stereo series SACDs that I've heard have outstanding sound quality and I'm sure this will be no exception.

Mark, many thanks for this timely response. All I have to do now is start saving up!