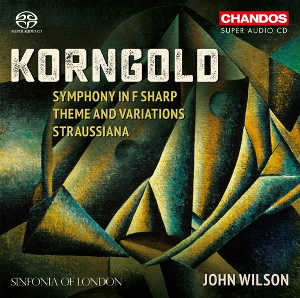 
Best known as a composer of film music, Korngold was born in Brünn, Austria-Hungary (present-day Brno, Czech Republic) and – as both a pianist and composer – was a child prodigy. Mahler and Strauss were impressed by the young musician, and recommended he study with Zemlinsky rather than ‘waste his time’ attending music conservatory. Korngold emigrated with his family to the USA in 1934, where he went on to revolutionise the Hollywood soundtrack, composing scores for films such as The Sea Hawk, Captain Blood, and The Adventures of Robin Hood.

Composed between 1947 and 1952, and dedicated to the memory of Franklin Delano Roosevelt, his (only) symphony is a heartfelt response to the conflict of WWII. The premiere, in 1954 in Vienna, was under-rehearsed and not a success, and the work remained neglected until Rudolph Kempe came across a set of score and parts in Munich and resurrected it.

The Theme and Variations and Straussiana were both commissioned by the Association of American School Orchestras, but Korngold makes no concessions to youth in his writing. Straussiana also reflects his lifelong love of the music of Johan Strauss II.

This is the first recording with John Wilson and his new orchestra, the Sinfonia of London. The hand-picked players represent the cream of London’s orchestral musicians, and create an outstanding quality of sound that is evident throughout this exceptional recording.

John Wilson follows up his superb survey of Aaron Copland’s symphonic works for Chandos with this new recording of three of Eric Korngold’s late works that were destined for the concert hall. These have to a large extent been overshadowed by the success of the composer’s many Hollywood film scores written for the Warner Brothers in the 1930s and 40s.

Wilson’s enthusiasm for the composer has already been exemplified by the inclusion of many Korngold film scores in his concerts at the BBC Proms and elsewhere. The orchestra here is the Sinfonia of London a body comprising some of the finest players from London’s orchestras. The Sinfonia was originally created in 1955 and re-formed in 2018 by John Wilson as a session orchestra for large scale recording projects. In that respect it evokes memories of a similar band – The National Philharmonic Orchestra – that with Charles Gerhardt also made many memorable recordings of film scores, including those of Korngold, in the 1970s. The liner notes indicate that further discs will follow over the coming months from these artists and it is to be hoped that more of Korngold’s orchestral music will be amongst them.

The main work on this SACD is the Symphony in F sharp Op 40, written very much as a labour of love between 1947 and 1952 and intended to herald the composers post-war return to the concert hall. Sadly the musical world had moved on and a tonal, large-scale late Romantic Symphony in the mould of Mahler did not find favour with the critics or audiences of the time. The work received a badly performed premier in October 1954 as part of a radio concert given in Vienna and conducted by Harold Byrns. It was subsequently neglected until championed by Rudolf Kempe who recorded it with the Munich Philharmonic nearly half a century ago.

Though there have been a number of fine recordings of the symphony on CD over the years, this is only the second to be available in hi-res sound. The first was from Marc Albrecht and the Orchestre Philharmonique de Strasbourg that appeared nine years ago on the Pentatone label. Korngold: Symphony - Albrecht . I enthused over this in my review and have not altered my opinion of its many virtues, but now also find John Wilson’s radically different interpretation to be equally compelling.

Wilson’s performance is characterised by swift, forward moving tempi in all four movements of the work that eschews any trace of a stodginess or glutinous sentimentality. The result is a much tougher and sinewy account of the score than is to be found in rival versions; one that moves the style of the symphony closer to the era in which it was composed rather than an example of fin de siècle romanticism. The playing of the orchestra is clean, lean and superbly disciplined throughout. The scherzo, for example, is played with breathtaking precision and confidence – a whirlwind tour de force. The third movement (Adagio, Lento - Con tristezza) flows convincingly even at a tempo seemingly in conflict with the markings given above, but thanks to the eloquent string playing, both the gravity and ardour inherent in the music is never short changed.

Timings for both recordings epitomize the differing approaches of the two maestros.

Korngold aficionados will be delighted with either one or both of these recordings.

Having completed in 1952 both the Symphony and the work by which Korngold is best known today – his ravishing and much recorded Violin Concerto – Korngold received two commissions from the American School Orchestra Association that resulted in the two delightful works that complete this programme and illustrate the composer’s orchestral mastery to the full.

The ‘Theme and Variations Op 42’ making its debut on SACD uses a simple theme marked ‘to be played like an Irish folk tune’. This is then subjected to seven contrasting variations that demonstrate Korngold’s remarkable inventiveness and melodic fluency. It proved to be Korngold’s final composition. ‘Straussiana’, like the Theme and Variations was completed in 1953 but was assigned no opus number. It comprises a polka, a mazurka and a waltz enrobed in glittering re-orchestrations of music from three of the least known stage works of Johann Strauss II. Both brief works receive affectionate and crisply played accounts that leave one wanting more (especially as the total playing time of the disc is a mere 59.17!).

The venue for these recordings was the Church of S. Augustine, Kilburn, London (14-16 January 2019) and the experienced Chandos team of Ralph Couzens (sound engineer) and Brian Pidgeon (producer) have achieved a sound that balances clarity with warmth most effectively. Informative and authoritative notes by Brendan G. Carroll complete a most stimulating release.

Looking forward to this.
The Symphony on Pentatone is very well played and enjoyable but it will interesting to see what Wilson does with it.

And it sounds like he does a lot of interesting things with it!
Thank you Graham-now really looking forward to it. It's on its way.

John
I hope you enjoy it as much as I did. I would welcome your thoughts when you have listened to it.

I have known this symphony by many recordings over the years and have been perfectly happy with the Albrecht-Pentatone recording.
This new one however,for me,clearly eclipses that and any others I have heard.

Wilson's tempi are generally a few minutes quicker for each movement than Albrecht,giving the symphony a sharper more dramatic focus.
Wilson's Adagio is superb building to a stunning climax which left me gobsmacked!

Add another first rate recording from Chandos and what more could you ask for?

Chosen as BBC Music journal as 2020 Orchestral Recording of the year..

'John Wilson has reformed the Sinfonia of London, and, boy, does it sound good. There’s heart and soul in every note of Korngold’s remarkable Symphony in F sharp, the composer’s only symphony and one of his finest scores. Rarely has the Adagio packed such a powerful emotional punch.'

John Wilson and the Sinfonia of London are becoming a superb ensemble as their recent Escales disc has proved once again. It comes as a surprise to hear that Chandos are not taking full advantage of their current success and popularity

The violin concerto recording is with a different orchestra of course. I seem to remember Chandos once stating that if the recording location couldn't support recording in multi channel, then they wouldn't release in SACD.

I have been holding off on buying this one though, as I have hitherto been content with the Albrecht recording, but the multiple plaudits mean I may need to reconsider !

I too expected and was looking forward greatly to Chandos letting Wilson and his orchestra give us the Violin Concerto after their superb Symphony.
Not interested in a CD.
As I said above, was happy with the Pentatone but this new one knocks it out of the water.

Fortunately Liza Ferschtman's performance of the Concerto on Challenge Classics is both heart stoppingly beautiful and wonderfully recorded by Bert van der Wolf, so that will do me nicely thank you!

Will have to check that one out!
Presently have the Steinbachter.

The Sinfonia of London under John Wilson are an outstanding ensemble and their recording of these Korngold works is excellent; crisp, expansive and dramatic. Chandos have captured the acoustic of the venue extremely well aided by the solid stone walls and high roof of the knave of The Church of St Augustine in Kilburn, London.

Presumably the recording engineers select such venues purposefully, on the other hand the acoustic should match the nature of the music itself. Whether Korngold's music can be regarded as spiritual is a moot point. Still it sounds good with space enough for brass and woodwind tones to fully develop. Strings, especially 1st violins are a little harsh at times. Overall the sound-stage is somewhat amorphous because of the unusual positioning of the players with the need to fit them into the restricted space of the knave of the church.