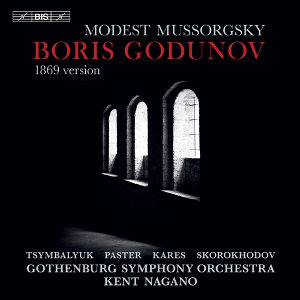 
Modest Mussorgsky’s Boris Godunov stands out among the major works of the opera repertoire in having an extremely complex creative history. The original libretto, by the composer himself, was based closely on Pushkin’s Shakespeare-inspired drama about the ill-fated Russian ruler. Mussorgsky completed the score in 1869, and submitted it to the committees of the Imperial Theatres.. It was rejected, however, primarily because of the lack of a female lead and therefore a love interest, but Mussorgsky’s unadorned style has also been mentioned as a reason. In 1871 the composer therefore reworked the opera extensively, adding new scenes – and a female principal in the form of the Polish princess Marina Mniszek – and changing the overall structure from seven scenes into a prologue and four acts.

The revised Boris was completed in 1872, and two years later it was finally performed in St Petersburg, while the Moscow audience had to wait until 1888, seven years after the death of its composer. In order to promote the work, Mussorgsky’s colleague and friend Rimsky-Korsakov later undertook to revise the work, making the orchestration more traditional and colourful and softening a number of harsh harmonies. It was the Rimsky-Korsakov version that took the opera out of Russia and without it, the opera would not be as widely known as it is today. In recent times, however, several opera houses have begun performing the more abrasive original version from 1869, and it is this ‘Ur-Boris’ that has been recorded here. It is performed by the Gothenburg Symphony Orchestra under its principal guest conductor, Kent Nagano. They are joined by a cast of mainly Russian vocal soloists, headed by Alexander Tsymbalyuk as Boris, a role he performed under Nagano already in 2013 at the Bayerische Staatsoper. In the opera, as in Pushkin’s drama, the Russian people plays a hugely important role – here performed by the Göteborg Opera Chorus.

Recorded at public performances and additional sessions, from 2nd to 11th March 2017, at the Gothenburg Concert Hall, Gothenburg, Sweden, 24/96

I believe this is a 'first' on SA-CD so let's hope it is good.

You are correct. ("Unfortunately" it's the original version of the opera, which did not have the Polish acts.) Gergiev recorded both versions for Philips, but those may or may not have been in 24 bit. We'll have to wait until record labels begin remastering the old recordings, like Karajan's famous set of the Rimsky-Korsakov orchestration.

(As an aside, record labels glut the market with numerous versions of the same works over and over and over while some notable works and recordings remain unavailable. "Boris Godunov" is - still - one of those. There's no "Khovanschina" either.)

This is a terrific recording. Spatial sound in astonishing clarity, very good Russian singers and of course Nagano knows how to pace this opera. I don't think I am biased by the fact that the orchestra and choir are from where I live (Göteborg/Gothenburg, Sweden). But I'm of course the last person in the world to say if I'm biased or not...
Actually I prefer Boris in its original version; I find the Polish part rather boring musically, although it brings a lot to the drama.

When I bought and downloaded this recording (if you hurry, it's half the price) from classical.com last Sunday, three files were missing. I had to download them separately and then rename them to get them in the correct playlist order. I think it was files 108, 115 and 116. I don't know if this is a specific Mac problem, but Eclassical manager Georg Olvik suggests so in an email correspondence.

That's strange that you had issues downloading from eClassical - I also purchased the album from them and downloaded on a Mac and had no missing files!

I concur with you that this is a first-rate performance and beautifully recorded. The cast is first rate; I can not imagine it being bettered today. I do like the Polish acts, however, particularly the Marina Mnishek act and I am sorry that they skipped it. I did send them an email suggesting they record the missing acts and do what Claudio Abbado did on Sony, allow people to program their preferred version of the work.

My only objection to the recording is that I wish the Chorus, as good as they are, had been larger. For a chorus heavy piece like "Boris Godunov" size does matter! But the performances overall, from orchestra, choir and all soloists, are exceptional.