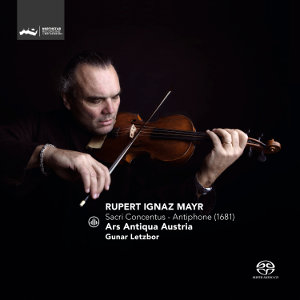 
Following on from the highly expressive psalm settings, we now present the glorious antiphons of the master from Schärding am Inn: exquisite church music which Emperor Leopold I himself proclaimed as being definitive for the Catholic lands.

Originally, the antiphon denoted a Gregorian chant that was sung by two parties opposite each other. Often a single performer was answered by a group of singers. The antiphon would later disengage from the psalm on which it was commenting. The antiphons set by Mayr represent a special form of the genre, so-called Marian antiphons, almost all of which are addressed to the Mother of God. Only In terras descendam is intended for Christmas. The antiphonal practice is still apparent in all antiphons in the alternation between singers and instrumentalists.

We owe it to enterprising scholars and ditto orchestral formations that more and more forgotten music comes to the surface. For all I know, L’arpa festante (a Munich, Germany, based Baroque chamber orchestra) were the first to record some of Rupert Ignaz Mayr’s oeuvre. But since then, Gunar Letzbor and his ‘Ars Antiqua Austria’ have enriched the catalogue with two more releases entirely devoted to the church music of this composer. The difference and beauty of it is that these have been recorded in Super Audio of outstanding quality.

Without repeating all I said previously in my review of Mayr: Psalms from Sacri Concentus 1681 - Letzbor, let me just recall that Herr Mayer was a violinist of some considerable standing, working as Kapellmeister in Germany and who had perfected his compositional skills with Lully in France. But that is not all. In those days, music life was much more cosmopolitan than one might have thought now. Not only did Mayr combine German and French influence in his music, he also had a leaning towards Italian baroque idiom. That’s why his oeuvre is so interesting and marks, indeed, an important page in the history of church music

Once again, the cast of soloists is without exception up to the mark. Especially the crystal-clear boy soprano of Christian Ziemski, replacing Fabian Winkelmaier, also a chorister of the Sank Florian stable. He will not fail to fascinate listener’s uppermost expectations. His voice has, up to the highest register, that so very special freshness only boy choristers seem to be able to produce.

In harmony with the 10 musicians of ‘Ars Antiqua Austria’, playing and singing is every bit as good as in the first release. Recorded on location in St. Florian, Austria, moulded to perfection by Letzbor and engineered by Bert van der Wolf cs. no further laurels are needed.

Together with Letzbor’s liner notes, describing in detail the four ‘Sacri Concentus – Antiphonae’, adding to the historical value of this album, I do think that, like its predecessor, this follow-on recording is a must for all lovers of the genre, and I’m convinced that it will equally please all those who appreciate state of the art playing.