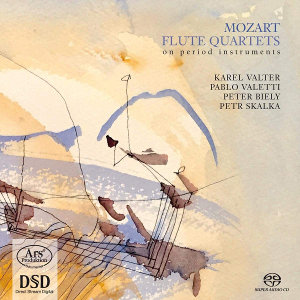 This may well be the one you have been waiting for. The actual count of Mozart’s complete flute quartets stands at six, this one included. Ample choice one might say. However, most have reason for critical consideration. At first glance Michala Petri, playing a recorder instead of a flute (recording released on OUR Recording), seems a good one, but alas! the sound quality is not. (I have it, so I know). For better sound Pentatone PTC5186567 comes into the picture. It gives the usual 4. As does Kuijken cs. on Esoteric. Good though some of the latter’s remastered material may be, it remains an older recording and only available in stereo. Karl-Heinz Schütz on the Camerata label adds the for flute arranged oboe quartet, but in Blu-Ray, and also stereo only.

This new ARS Produktion release has all four, plus the F.A. Hoffmeister arrangement of the oboe quartet, played on period instruments and recorded in the best possible multi-channel high resolution. If, and I will get to that, it is played well, then we have a winner. Yet, there is a price to be paid, depending on how much value one is prepared to lend to it: In order to get it all on one disc some corners had to be cut. It has nothing to do with speed (as sometimes happens); it’s all about respecting repeats or choice of which version to use. I, for one, don’t think that’s a big deal. The repeats add to the duration not to the emotional impact. Moreover, these quartets weren’t written for emotional impact. These are the product of a request by a rich Dutch lover of the flute, Ferdinand Dejean, which were meant to be no more than, in the words of Peter Reidemeister’s excellent and intriguingly readable liner notes: “Beautiful chamber music for connoisseurs and amateurs”.

The four players may not be familiar to many, but they are or have all been connected to the famous Scola Cantorum Basiliensis and the baroque scene in Spain (Catalunya, Grenada and/or Sevilla), contributing their individual experience to the common performance in a highly professional way. That is: Giving each of the quartets the masterly light-hearted touch they deserve, thus underlining the genius of a composer able to write such commissioned “Gelegenheitswerke” (occasional works) in a way many of his contemporaries were not even able to do in their most serious efforts. The secret of a good set is not trying to put more into it than it contains, which is, for Mozart, all that’s needed.

The sound is gorgeous in every aspect. Give them a well merited try!