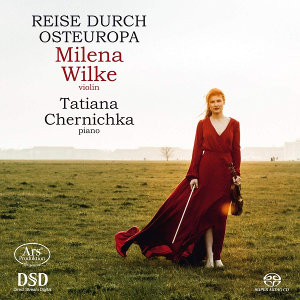 Every now and then I’m taken by surprise when listening to a hitherto barely known artist. This is such an occasion. Firstly - and I should have known had I read the liner notes first - because of the recital starting off with a poem in beautiful German, a poem of Milena Wilke’s own making, followed by her opus 2, a short, but well-crafted rhapsody for solo violin with clear Balkan reminiscences. Secondly, to hear such an elegantly polished, yet robust and stimulating playing that marks a true artist with considerable scope for the future.

The chosen programme stems from a painting (Milena’s Grandfather), which is not only the inspirational source for the poem and subsequent short rhapsody, but also prompts the title of the disc: “Reise durch Osteuropa’ (Trip Through Eastern Europe), in search of answers to “the problems of this world”. It is not by accident, she says in her liner notes, that the next choice starts in the same key the rhapsody ends with, thus passing on the big question mark of her poem “when does humanity end” to the first movement of Ernst von Dohnanyi’s Violin Sonata Op. 21.

Some time ago Praga Digitals issued a precious series of Dohnanyi’s chamber music. In doing so, they have rendered the hi-res community a great service. The more so since the oeuvre of this Hungarian composer had for too long remained in the wings of classical music stages. However, not all of these releases turned out to be of equal sonic standard. Any further release should, therefore, be welcomed for considered scrutiny. I’m glad that, apart from the (very) few RBCD’s (like the 1984 PeterSalaff / Barry Snyder on the Pro Arte American Artists Series label), we now have a new account of Dohnanyi’s Violin Sonata, but this time in super DSD quality, putting some of its details in a clearer and much better-defined perspective.

But that’s of course only part of the scrutiny. In terms of interpretation I was also struck by the affectionate and elegant way Milena Wilke interprets this Brahms-like sonata. Her phrasing and tonal beauty are most remarkable, using little vibrato - just enough to lift the romantic content to the surface - thus demonstrating an enviable musicality and a total command of her instrument. Together with her expressive virtuosity in the final movement makes this sonata alone already worth having this recording.

Moving on to Josef Suk, Eastern Europe opens up further, this time in a Czecho-Bohemian environment, with 4 folk tune based pieces. Yet another rarely played nor recorded set, presented in a glowing performance, ranging from ‘tristesse’ to ‘Burlesque’, superbly supported by Wilke’s Russian companion, Tatiana Chernichka, making this new release all the more desirable.

Their next port of call is further afield with Sergei Prokoviev’s 5 melodies, raising by the way the question whether or not the Eastern-European trip has to be taken literally, as these ‘tunes’ were, in fact, composed during a period of exile in the United States of America as a ‘vocalise’ song cycle (‘Lieder ohne Worte’) for a Russian soprano, to be arranged 5 years later, after his return to Europe (Paris), for violin and piano, which is the version recorded here. Many scholars prefer this one, being even more beautifully scored than the original (Californian scenery inspired?) vocalises. Whatever the case, Wilke obliges as before with caring, warm-hearted and, indeed, song-like playing.

The remaining item on the menu comes from the Polish composer Henryk Wieniawski, with his Fantaisie-Brillante’ Op. 20, closing the circle of searching for an answer to a question which, I’m afraid, is beyond human reasoning. Ms Wilke recognises that the hero in Wieniawski’s Fantaisie-Brillante, Goethe’s Faust, creates infinite more questions than answers and she lands from her lofty idea to solid soil: “When will humanity cease … to tell stories?”

Notwithstanding the fact that not everything is as East-European as the title indicates, possibly suggesting that the trip should be seen in its spiritual sense, I’m firmly of the opinion that all those having contributed to making this recording possible, can be proud and grateful for Milena and Tatiana having lived up to their - in my view no doubt greatly surpassed - expectations.

Though I hardly ever have doubts about their recording techniques, and in spite of knowing that surround is a distinct feature of the ARS Produktion mastering team, I noted that, seated in my preferred position, ‘front’ and ‘surround’, overlap on occasion in the overall sound picture. Some may like it though.