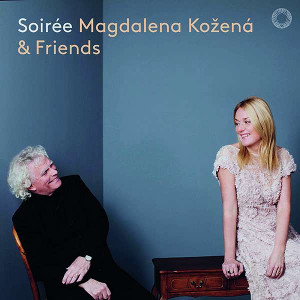 
AN EVENING OF INTIMATE SONGS AMONG FRIENDS

Soirée captures the atmosphere of informal, domestic music making. Czech star mezzo-soprano Magdalena Kožená offers an intimate and highly personal collection of international songs together with an outstanding group of musical friends, including Sir Simon Rattle, who makes his recording debut as a pianist. The German lied is represented by Brahms (Two Songs, Op. 91 and Five Ophelia Songs, WoO 22) and Strauss (Morgen!), the French chanson by Chausson (Chanson perpétuelle) and Ravel (Chansons madécasses), and 20th-century avant-gardism with Stravinsky’s Three Songs from William Shakespeare. In between these explorations, Kožená revisits her musical roots with a selection of Dvořák songs, arranged by Duncan Ward, as well as Janáček’s Nursery Rhymes.

Soirée is the second release of Magdalena Kožená’s exclusive collaboration with PENTATONE, after having presented the baroque cantatas recital album Il giardino dei sospiri in 2019.

This is the second release on the Pentatone label from celebrated Czech mezzo-soprano Magdalena Kožená. The first entitled ‘Il giardino dei sospiri’ featured her in some of the Baroque repertoire that launched her career in the 1990s and quickly elevated her to star status. Since then she has widened her musical horizons and now has a repertoire that encompasses the music of five centuries. All the works on this imaginatively planned and beautifully recorded SACD, entitled ‘Soirée’, were composed in the 19th and 20th centuries, some of them fairly unfamiliar or rarely performed. The composers represented are Chausson, Dvořák, Brahms, Stravinsky, Ravel, Janáček and Richard Strauss.

The accompaniments are provided not only by Kožená’s husband Sir Simon Rattle, here making his debut, on disc, as a pianist, but also from six ‘friends’ – four string players drawn from Berlin’s finest orchestras plus flautist Kaspar Zehnder and Andrew Marriner, the recently retired Principal Clarinet of the LSO. With such a distinguished ‘supporting cast’ of musicians hopes run high for a most stimulating recital and this is exactly what it proves to be. The stylistic variety of the music demands a considerable degree of vocal flexibility and Magdalena Kožená is never wanting in that aspect of these performances.

In Chausson’s lovely mélodie ‘Chanson perpétuelle’, that opens the programme, The singer’s rich yet silvery mezzo floats entrancingly with a firmly drawn line above the soft cushion of the piano and string quartet. Her empathy with French song is further manifested by her persuasive account of Ravel’s three ‘Chansons madécasses’. The cool elegance of her phrasing in the two erotically charged outer songs ‘Nahandove’ and ‘Il est doux’ contrasts strikingly with the frightening intensity with which she delivers the anti-colonial sentiments of the central song ‘Aoua’.

Not surprisingly it is in the music of her Czech homeland that Kožená is especially engaging. She brings an idiomatic warmth to a selection of seven Dvořák songs, brilliantly arranged by Duncan Ward for the whole instrumental ensemble. In the selection of eight songs from Janáček’s epigrammatic and earthy Říkadla (Nursery Rhymes) Rattle’s crisp piano playing and Marriner’s agile clarinet strike sparks off each other to entertaining effect while there are even occasional lusty vocal interjections from the other members of the instrumental group.

Brahms is represented first by his marvellous’ Two Songs’ op.91 for alto, viola and piano. Here Kožená is partnered by Rattle and the viola player Yulia Deyneka in the composer’s settings of Rückert's evocative eventide poem ‘Gestillte Sehnsucht’ and the sublime ‘Geistliches Wiegenlied’. Both songs are most sensitively delivered, though for this listener Kožená’s performances come nowhere near matching the range of expression and tonal beauty heard on the recording by the incomparable Janet Baker. Brahms is featured again with his ‘Five Ophelia Songs’ given in an effective arrangement by the composer Aribert Reimann for mezzo-soprano and string quartet. Each of these songs, that in total last just over five minutes, is sung with unaffected simplicity and vocal purity.

In complete contrast with the rich sonorities of the Brahms, the astringency of Stravinsky’s ‘Three Songs from William Shakespeare’ (1953) hits one like a sudden icy shower. These settings of a sonnet and verses from ‘The Tempest’ and ‘Love's Labour's Lost’ were written in the period in which the composer was dabbling with serialism. Undaunted by their challenges, and aided by the impressive combination of her vocal agility and perfect intonation, Kožená negotiates these tricky songs with ease. This is especially true of the third song (‘When Dasies pied’) where she gracefully darts about the quirky ornithological accompaniment of flute, clarinet and viola.

‘Soirée’ is nicely rounded off in tranquil fashion with a performance of ‘Morgen’, probably the best known of Strauss’s extensive lieder output. One might have expected that Rattle would have been the sole accompanist for his wife, but here he is joined by violinist Wolfram Brandl whose ethereal violin obbligato arguably makes the most lasting impression.


The album was recorded in Berlin’s historic Meistersaal (July 2017) by Lukas Kowalski (Emil Berliner Studios) and the Polyhymnia team (Erdo Groot and Jean-Marie Geijsen). T he 5.0 multi-channel DSD recording has captured all the nuances of the performances in a warm yet intimate acoustic. The forty page booklet accompanying the disc includes full texts and translations of all the songs and erudite notes on the music from James Parsons.

Magdelena Kožená’s. distinctive vocal timbre and fine musicianship could hardly be better showcased than on this disc. There can be little doubt that her many admirers will be delighted with the performances on this bold and wide-ranging song collection.