Thank you for your detailed review, as I had been hesitating for months over this one. As a registered user on the Digital Concert Hall, I have had the pleasure to watch ... 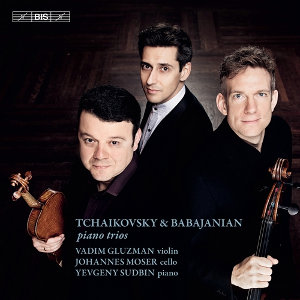 
In Russian chamber music, a rather special tradition evolved around the piano trio, with a number of composers turning to the genre to write ‘instrumental requiems’. First out was Tchaikovsky with his Piano Trio in A minor, Op. 50, ‘a la mémoire d’un grand artiste’, and he was followed by composers such as Rachmaninov, Arensky and Shostakovich. In the case of Tchaikovsky’s trio, the ‘grand artiste’ was the pianist Nikolai Rubinstein, and Tchaikovsky chose the trio genre as he felt that a piece for solo piano would be too lightweight and one with orchestral accompaniment would be too showy. The work is in two movements, a Pezzo elegiaco (‘elegiac piece’) and a set of variations, and it begins with the cello playing a moving lament which sets the tone for the entire first movement. The theme returns at the end of the second movement in the form of an impassioned funeral march.

Seventy years later, when the Armenian composer and pianist Arno Babajanian(1921 83) wrote his Piano Trio in F sharp minor, he didn’t give it any subtitle, but there’s a grandeur and breadth of scale which rivals Tchaikovsky’s work – and the second movement is thoroughly elegiac in character. The trio is Babajanian’s best-known work, composed in the Romantic style of Rachmaninov, but also rooted in Armenian folk music, melodically as well as rhythmically. Performing the two works are Vadim Gluzman and Yevgeny Sudbin, both with Russian roots, joined by cellist Johannes Moser, and the three close the disc with Sudbin’s arrangement of a brief Tango by Alfred Schnittke.

Should be another blockbuster for BIS; three outstanding musicians and Tchaikovsky’s lovely Piano Trio...

I received this disc in the mail yesterday, direct from Yevgeny. It's wonderful. Also my first Bis in the new Ecopack packaging, with no plastic. Oh, pity that discs didn't start out being packaged this way as the packaging is thinner and so more can go on to the rack shelf in the same space. Also, would have been good for the no plastic feature too. Hats off to Yevgeny and Robert.

I recall Steven, the endless debates we had on the old site about packaging. The consensus then was that cardboard cases were regarded as much inferior, cheap and often fell apart.

Nowt wrong with Super Jewel Boxes, carbon is locked up in them for a very long time. Not all plastic is the work of the Devil.

Yes, I remember the debates from long ago when people could actually discuss things here, rather than how it is now though no use going there.
Robert did not like super jewel boxes and really didn't like regular ones either. And digipaks are okay unless the plastic breaks. I like these new cardboard paks. They take up less space on the rack, if for no other reason. And hopefully they save Robert some money as he issues everything on sacd at cd prices, and is likely a large reason the one non Japanese pressing plant is still pressing sacd's.
A few new releases got added a couple days ago. The first additions in three weeks. This is not an encouraging sign, but hopefully not regularly repeated.

Sadly I don't think these will save Robert any money. According to the BIS website, the new Ecopak is "about 20% more expensive to produce than a normal plastic jewel case".

'Sadly I don't think these will save Robert any money. According to the BIS website, the new Ecopak is "about 20% more expensive to produce than a normal plastic jewel case".'

That confirms my suspicion: the flimsy ecopak is nothing more than 'global climate warming weather chaos disruption crisis emergency change' virtue-signalling moral narcissism. Maybe BIS gets a tax credit from the Swedish government that offsets the expense of this inferior product. Bring back the jewelbox, bissie.

Bear in mind Robert dropped the SACD Super Jewel box years ago, reverting to the hideous cheapo plastic CD case that always seems to be cracked when discs arrive through the post.

I for one welcome the new packaging, It is very attractive and takes up less room on shelves and you can drop it without concerns.

I agree with hiredfox, the new BIS ecopak, which was introduced appr. one year ago in May 2019 and was taken as BIS’s standard packaging method since June 2019, has been much more practical and customer-friendly carrier for SA-CDs and booklets compared to plastic CD cases or even worse Super Jewel Box case. Forming of annoying scratches are minimal and due to the thinner form more albums are possible to place into single CD shelf. Yes, it's a bit more expensive to produce but in my mind due to that the cardboard ecopacks are giving more luxury-like look for the products.