The many admirers and collectors of Iván Fischer’s superb recordings with his incomparable Budapest Festival Orchestra know that considerable patience is required where symphonic cycles are concerned. His (almost-a-complete) Mahler cycle, that is certainly one of the finest available, took 15 years to bring to fruition while in the case of Brahms, we still await his account of the 3rd Symphony. A well received release of Beethoven’s Symphony 7 in 2008 was followed by a coupling of the composer’s Symphonies 4 and 6 two years later and with this latest issue we have reached the halfway stage of what one hopes might eventually become a complete Beethoven cycle.

It is Fischer’s method of working that is one of the reasons for what to some may appear as a protracted time scale. Intense periods of preparation are followed by extensive live performances with the Budapest Festival Orchestra before he commits his interpretations to disc. Editing and assessment of each recording is then undertaken in close collaboration with producer and engineer Jared Sacks. Only when both are satisfied is the recording released. The results speak for themselves.

Fischer considers this particular pairing of two Beethoven symphonies to represent the important journey from the classical view of the symphony – as represented by Haydn – to the revolutionary romantic one and so, in keeping with that distinction, the 1st Symphony precedes the 5th on this disc. Other high resolution version such as those by Paavo Järvi (Sony) and Haitink (LSO Live) with perhaps a greater eye to commercial success, though less logic, present the more famous 5th Symphony first.

As with Fischer’s earlier Beethoven recordings these are ‘big band’, not period performances, with a muscular approach but one that avoids any suggestion of heaviness thanks to the athletic thrust and textural clarity that the conductor elicits from his players.

Fischer’s account of the 1st Symphony is relaxed and evenly paced with the emphasis being on elegance and precision rather than speed, thus allowing the listener full appreciation of, for example, the fine characterful woodwind playing of his orchestra. The symphony’s second movement is marked ‘Andante cantabile con moto’ and though some might prefer a faster more flowing account of this movement to Fischer’s rather measured tempo there is no doubt as to the beauty of the performance. The Menuetto is weighty but crisply played while the Finale has all the wit and elan that one could wish for.

The 5th Symphony’s opening movement is fast but, as is to be expected from these consummate musicians, notable for the precision of the playing as well as its power and unanimity of attack. The ‘Andante con moto’, in contrast, flows with an appealingly relaxed lyricism. The opening of the scherzo is unusual in terms of tempo and dynamics something that some may question though it gives the music an air of anticipation before the superbly swaggering horns burst forth. The trio section is notable for the impressive articulation of the basses, while Fischer’s transition from scherzo’s conclusion to the blazing C major of the finale is magnificently delivered.

Though the seemingly unstoppable release of fine recordings of Beethoven symphonies on download, CD, Blu-ray and SACD means that collectors have an enviable, if bewildering choice of competing versions available for their libraries, this one certainly joins the select few top recommendations for a coupling of these two works.

The 5.0 DSD recording was made in the generous acoustic of the Palace of Arts, Budapest in February 2017 by Jared Sacks who also undertook the editing and mastering processes. In terms of tonal warmth, clarity and a commendably wide soundstage it achieves the peerless standard of sound quality familiar from Channel Classics releases.

Great to see another SACD release by Channel as nowadays this seems to be rarity - most of the new releases have been conventional CDs only which is a pity.

Jared told us a few years ago that the only SACD they will release in future will be new performances by Ivan Fischer and Rachel Podger, the only artists that are self-sustaining in terms of sales. Every other new recording is available as a DSD download. Can't believe RB-CD is worth buying.

A shame. Channel made some of the best recordings ever in sonic terms.

Given the Honeck/Pittsburgh release of the Fifth, I'm surprised that Fischer decided to start there. Perhaps it will be interpretively quite different.

Thanks Graham for your excellent review.

Ivan Fischer is well known as a quirky character for sure; we have learned over the years that he so dislikes modern Russian composers works that he will not record them. Also he is an avowed opponent of completion in surveys and as far as I am aware we are still a symphony short of a full set of Brahms.

At live concerts of which there have been many in the UK at the RFH and BBC Proms in particular he has delighted audiences with his off the wall takes of "almost sacred" repertoire, Who could ever forget his RFH Pastoral with podium tree or his tongue-in-cheek semi staged version of the Magic Flute that seemed to go on all night with many late trains missed? Not to mention his journey into the folk tune world that so inspired Bartok's music or that late night BBC Prom devoted entirely to his band playing unrehearsed audience requests;
"we've played one Mahler piece this evening that should be enough for anybody" !!!

There are very few conductors or ensembles that are so compelling in the inherent rightness of everything they do as Ivan Fischer and the Budapest Festival Orchestra and very few that could these days command a genuine "Fan boy or girl" cult following as these artistes do.

Iván Fischer’s Beethoven performances in the NYC area have always been provocative. Seating the timpani in the soloist’s position next to the podium in Beethoven 1, or putting the principal wind players in a ring around the podium for Beethoven 7 allows for a different and enhanced perception of these important orchestral parts, bringing them out of the texture and highlighting the soloistic and virtuosic quality of their roles in front of, but still within, the frame of the symphony. His Beethoven 9 in early 2017 found the 60 (or so) members of the chorus, in street clothes (not concert attire), placed throughout the Orchestra level and first tier seats in Geffen Hall; a spectacular effect, especially given the political atmosphere in the US at the time. “Alle Menschen werden Bruder” indeed! 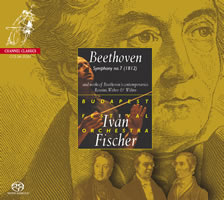 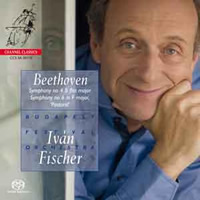