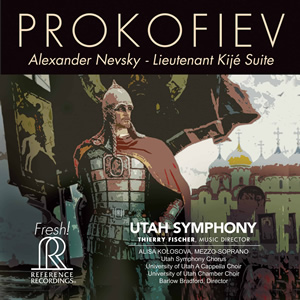 
Reference Recordings is proud to present the Utah Symphony conducted by Thierry Fischer, in grand new performances of Alexander Nevsky and the Lieutenant Kijé Suite, two of Prokofiev’s most brilliant and dramatic musical works. The music of Lieutenant Kijé was originally written as the score to the film of the same name, released in March 1934. It was Prokofiev’s first film music and his first commission. Prokofiev soon adapted it into the five-movement Lieutenant Kijé Suite, first performed in December 1934, and which quickly became a favorite in the international concert repertoire. Then, in 1938, Prokofiev collaborated with film director Eisenstein to create the score for the film Alexander Nevsky. He later adapted much of his score into the large-scale cantata for mezzo-soprano, orchestra and chorus featured on this recording.

Founded in 1940, the Utah Symphony performs more than 175 concerts each season and offers patrons access to world-class live musical performances of the world’s greatest music in the state’s top venues. Since being named the orchestra’s seventh music director in 2009, Thierry Fischer has attracted leading musicians and top soloists, refreshed programming, drawn increased audiences, and galvanized community support. In addition to numerous regional and domestic tours, the Utah Symphony has made seven international tours and performed at Carnegie Hall in Spring 2016 coinciding with the orchestra’s 75th-anniversary celebrations. The Utah Symphony has released more than 100 recordings, including recent Reference Recordings releases of Mahler’s Symphony No. 1 and Symphony No. 8, Andrew Norman’s Switch, Nico Muhly’s Control, and Augusta Read Thomas’ Eos.

Discerning collectors are used to releases from the Reference Recordings label receiving effusive plaudits, not only for the high artistic level of the performances but especially for the thrilling audiophile sound quality that brings listening at home to a new level of enjoyment. This latest spectacular recording from Thierry Fischer and the Utah Symphony of two of Prokofiev’s most popular film related scores will assuredly continue that trend.

In 1938 Prokofiev received a commission to work with the celebrated director Sergei Eisenstein on the music for the film ‘Alexander Nevsky’. The mutual admiration each man had for the other’s artistic endeavours proved to be an ideal collaboration that resulted in one of the greatest film epics of the twentieth century. The film tells the story of the invasion of Russia in the 13th century by crusading Teutonic knights whose cruelty is graphically depicted. Prince Alexander Nevsky of Novgorod inspires the people of the Pskov region to take up arms against the invaders. They do this in what is the longest and most complex sequence in the film, the famous ‘Battle on the Ice’ that takes place on a frozen Lake Preipus. Nevsky and his forces are victorious and return in triumph to Pskov.

Shortly after completion of the film Prokofiev re-arranged and expanded his music into the imposing seven movement dramatic cantata for the concert hall heard on this SACD.

Over more than ten seasons as musical Director of the Utah Symphony Thierry Fischer has moulded the orchestra into a wonderfully responsive and virtuoso body of musicians as the playing here clearly demonstrates. His tempi throughout are well judged, closer to Prokofiev’s markings than some versions on disc, and his pacing of the work always displays clear musical and dramatic purpose. The purely orchestral movement ‘Russia under Mongolian Tyranny’ that opens the work is just one example of the sensitive and atmospheric playing on offer. In ‘The Battle on the Ice’ that is justifiably the high point of this score Fischer does not rush his fences, so the steady build up to the battle’s climax, while never lacking excitement, is made all the more impressive. The soloist in the sixth movement ‘The Field of the Dead’ is the Russian mezzo-soprano Alisa Kolosova. Her youthful vocal timbre and vibrant idiomatic delivery is most appealing in this moving threnody. And the exemplary integration by the recording engineers of Kolosova’s voice with Fischer’s flowing accompaniment is most welcome, especially when all too often the soloist is unrealistically positioned too close to the microphone.

The large chorus, well drilled by director Barlow Bradford, comprises the Utah Symphony Chorus, University of Utah A Capella Choir and the University of Utah Chamber Choir. Their legato singing in the ‘Song of Alexander Nevsky’ is quite lovely as is their discipline and precision, but occasionally, in the cantata’s more dramatic sections, I would have welcomed a tad more trenchant fervour, though in general there is no lack of vocal firepower.

While there have been many recordings of this work over the years this is only the third to appear in multi-channel sound and in sonic terms alone leaves the competition standing though it must be said that the 1961 version from Thomas Schippers and the New York PO on a single layer SACD still sounds remarkably vivid and wears its 58 years lightly.

The Lieutenant Kijé Suite is one of Prokofiev’s most popular works and needs no introduction having received innumerable recordings on disc, though surprisingly this is only the fourth to appear on SACD in multi-channel sound. Fischer, unlike Litton on BIS, opts for the usual five-movement concert suite rather than the alternative version in which the Romance and Troika movements are sung by a baritone. This fleet and beautifully characterised account of the score, superbly delivered by his Utah musicians is, for this listener, something of a revelation, while the state-of-the-art sound vividly captures every facet of Prokofiev’s distinctive orchestration from high piccolo to floor shaking bass drum.

The Soundmirror team are already familiar with capturing, as here, a wonderfully coherent soundstage and rounded ambience in the generous acoustic of the Maurice Abravanel Hall, Salt Lake City, Utah where both works were recorded live (18th and 19th November 2016). The multi-channel 5.0 recording, made and post produced in 64fs DSD, offers a degree of aural realism not to be found in any rival medium, but is shown to particular advantage in large-scale orchestral and choral pieces such as these.

It need hardly be said that as always from Reference Recordings the presentation of this release is first class. The excellent liner notes include – a splendidly informative seven page essay on both works by Paul Griffiths, an English translation from the Russian of the vocal sections of Alexander Nevsky, as well as a listing of the members of the Utah Symphony and all the other performers involved.

This stunningly recorded disc with 60 minutes of compelling music performed with style and verve will almost certainly make it the go-to choice for a modern version these two works.

Give this one a listen! Fischer conducting and Sound Mirror recording gives us a truly impressive orchestral and choir experience. Right from the opening bars you know you are in for a fantastic musical experience. I've listened to it twice and turned up the volume to capture the full orchestral experience. The recording is really THAT good.

Doesn't surprise me at all, Sound Mirror recording at 4 x DSD64, what's not to like. John Newton found his way around the Block many years ago every one of his recordings is a tour de force.

Have had it for a while but no chance yet to review it seriously but sonic qualities are beyond reproach. Some of the SM Fresh series are a bit over-cooked IMHO but generally John Newton & his team still have the special insights that have made their SACD recordings so desirable.

This is an entry I made for the new disc by the National Symphony Orchestra's new SACD recording that is worth copying here.

Good for them. They are working with LSO Live so this may well be a series of DSD recordings...

How about this then..