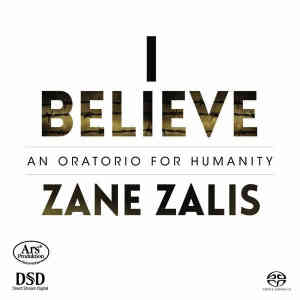 This is not an oratorio in the original sense, i.e. about a religious event. This is a ‘humanistic’ oratorio dealing with human relations, conveying in an impressive and immensely moving fashion “a story of hate, survival and hope … told from within the minds of the victims and perpetrators”; it is about the largest planned genocide in modern history, it is about the Holocaust.

The oratorio ‘I Believe’, composed by the Canadian composer of Ukrainian origin, Zane Zalis, was premiered in 2009, in Winnipeg, Canada, and ‘live’ recorded by Lyrics (OCLC 640140955). Its twelve parts cover the period of 1933 till 1945 and are, in the words of the composer “a singular large-scale work divided into 12 movements using the artistic forces of a symphony orchestra, large mixed chorus, children’s chorus, ensembles, soloists and narrator. The artistic architecture is influenced by a host of sources all in service to capture the essence of a story that needs to be told, in a plea for awareness, understanding and peace”. Zalis uses a powerful, contemporary musical language, accessible to all, but appealing especially to today's generation.

In 2013 the European premiere followed, held in Stuttgart, Germany, and last March the Bayer-Philharmoniker under the baton of its Music Director, Bernhard Steiner, staged it in Wuppertal’s historical Stadthalle (concert hall) - in the presence of the composer - with the same cast of singers and narrator and the combined choirs of the Stuttgart ‘Solitude’ the ‘Koncertgesellschaft Wuppertal’ and the ‘Leverkusener Kinder- und Jugendchor’. For detailed information about soloists, orchestra and choirs I take the liberty to refer to the liner notes. ARS Produktion recorded this concert and has now released the result in DSD Super Audio.

When commenting on it, several factors need to be taken into account. Recording ‘live’ is not always easy to the extent of having or not having the opportunity to make editorial corrections. Secondly, keeping in mind that we are dealing with amateur, or semi-amateur forces, a different yardstick applies. The Bayer-Philharmoniker is a semi-professional orchestra of which most of its members are closely associated with the Bayer factory in Leverkusen.

Notwithstanding these facts, I’m firmly of the opinion that we have here a musical ‘document’ that conveys in an authoritative, sometimes even trenchant fashion this darkest part of European history and ‘the power of faith during the Holocaust, at which time cruelty and hatred reached unimaginable proportions’, as stated in the programme notes of the Canadian premiere. The narration, done by Stefan Müller-Ruppert, is in German, with exemplary and beautifully pronounced recite. It is a pity that no original text of the narration is given. However, the singing parts are in English with abridged lyrics in English and German provided in the booklet.

The voice of the Canadian ‘theatre’ soprano, Kelsie Cowie, who also sung in the Canadian premiere, is captivating, embracing the varying moods from obstinate to desperation and from disbelieving to believing with gripping perfection. And so do the other two leading male roles, sung by the French-Canadian Jean-Pierre Ouellet and the Austrian, Marko Zeiger. In the face of these professionals, the disciplined choirs do a splendid and persuasive job. I have, last but not least, listened with great admiration to the musicians of the Bayer-Philhamoniker. Superb brass, too. Laurels have also to be extended to their devoted Music Master, Bernard Steiner, who ably directs the total of more than 200 people on stage to a memorable execution of this humane tragedy, making the listener shiver from beginning to end.

Tribute goes to all who have made this recording possible, in particular to Bayer Kultur and the engineering of ARS Produktion, having had the immense task of capturing this performance with natural dynamics and wide surround, creating an immersive environment for the home listener.

This disc not only deserves a special place in your library, but also, and perhaps most of all, in your mind. The more so with renewed growth of anti-Semitism in our time.