The Rolling Stones: Let it Bleed 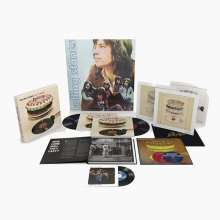 
Considered by many to be the jewel in the crown of The Rolling Stones’ unbeatable 1960’s albums, ‘Let It Bleed’ saw the band wrap up a turbulent decade with an album that uncannily reflected the times and signposted the uncertain 1970s. Rightly regarded as one of the most important rock albums of all time, the album that brought us ‘Gimme Shelter’, ‘You Can’t Always Get What You Want’, ‘Midnight Rambler’ and the title track ‘Let It Bleed’, celebrates its 50th anniversary with this beautiful limited, hand-numbered Deluxe Edition. Included in the package are 2X 180-gram LPs in stereo and mono with restored original album art, 2 X Hybrid SACDs in stereo and mono housed in custom 12” sleeve, a 7” of the in-era single ‘Honky Tonk Women’ / ‘You Can’t Always Get What You Want’ in mono with original picture sleeve. There’s also a beautiful 80-page hardcover book with essay by David Fricke and never-before-seen photos and three 12”x12” hand-numbered lithographs, a full-colour poster. All of the original audio has been remastered by Bob Ludwig at Gateway Mastering.

Bob Ludwig's new (2019) 24/192 PCM transfer of the stereo version is also available as an individual download album. This should sound a bit different from Ludwig's 2002 transfer The Rolling Stones: Let It Bleed.

“When we did the first Let It Bleed remaster in 2002, our intention was to pay homage to the original work. When we did this new version, the purpose was to make it as great as it could possibly sound. If you listen on a good set of speakers or good headphones, you’ll hear subtle things in the background that are now much more clear that were somewhat hidden before.” - Bob Ludwig

It is at least great to see it coming out as a stand alone SACD issue and not just confined to the Uber box set as Gene Clark's 'No Other' seems to be. At this point though I'm a bit wary of the tarting up that it may have gone through. Based on the 2002 SACD remaster the tapes seemed pretty frazzled.

It will be very interesting to hear peoples opinions/comparisons of the result all the same.

The stereo version of Bob Ludwig's new transfer is available as a 24/192 file from download vendors.

The new mono and stereo SACDs are not being sold separately from the box set, as far as I can tell.

CD Japan lists a Japan exclusive 7 Inch Deluxe 2 disk SACD only version - Much like the one done for Beggars Banquet, costing a touch over $68 USD and slated to hit the racks come 18th December 2019.

Thanks for confirming that CDJapan will be offering a two-SACD set of Let it Bleed. Good news for SACD collectors who don't want the 2-SACD / 2-LP box set.

Consensus is that the original UK mono LP of Let it Bleed was not a dedicated mono mix from the multitrack session tapes, but "folded down" from the stereo master. Same was true of the mono LP of Beggars Banquet; only Street Fighting Man was mixed from multitrack to mono, the rest was folded down. Posted on the Steve Hoffmann site in 2008:

"I handled the Beggars Banquet Decca master many years ago and the cutting instructions on the stereo master said something to the effect -- in order to cut in mono, please replace stereo version of Sympathy For The Devil with mono version at end of reel, and then sum entire album to mono." (Bill Levenson)

From a recent article at http://recordcollectornews.com/2019/10/the-rolling-stones-let-it-bleed/

"...Bob Ludwig was tasked with remastering this edition of Let It Bleed and worked from Direct Stream Digital files taken from the original tapes at a 2.8 MHz sampling rate."

DSD files created in 2002 for the ABKCO SACD and DSD LP releases, or new DSD transfers? Either way, there should be some interesting differences between the new Universal Music SACDs and the 2002 ABKCO SACD.