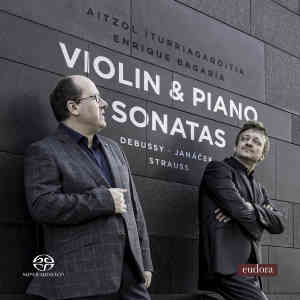 
Two leading artists team up and bring together a selection of violin and piano masterpieces, performed in an outstanding and insightful way. Debussy’s sonata, composed in the last years of the French composer’s life, is full of sensuosity, while Janáček’s four-movement sonata is full of nationalistic feelings and of intense fragmentary gestures. The recording closes with Richard Strauss’s monumental and overtly romantic sonata, composed by the great German composer when still in his early twenties.

There is a rumour, which I believe is true, that if you want a good French wine at an attractive price, look for a château with a name difficult to pronounce by foreigners. This crossed my mind seeing the name of the violinist Aitzol Iturriagagoitia on the cover. It may be a common name in Spain, but I found it difficult to grasp. However, listening to him playing these three sonatas, I quickly forgot all about it. What a mastery, what a compelling violinist Aitzol is (I do hope Mr Iturriagagoitia will forgive me if I’ll stick to his surname in my review).

For each of the three sonatas several other versions are available. As for Debussy the count stands at 14. Not all of them in the same quality bracket though. In fact, many miss some of the typical French touch. And of the few remaining, I find it hard to pick the ultimate cherry, albeit that I was very pleased with the recent Challenge Classics The Great War Centenary - Foyle, Štšura. Liv Migdal on ARS Produktion is excellent as well Beethoven / Debussy / Strauss: Violin Sonatas - Migdal / Migdal. And … so is Aitzol with his absolutely splendid piano companion, Enrique Bagaria. A little bit faster, but superb playing. One hears the professor, keeping his attention focused on detail, phrasing and expression. An enlightening performance, revealing the depths of the true meaning as expressed by the composer in a for his (Debussy's) style somewhat unusual scoring.

Janáček’s violin sonata is another ‘war time’ composition. It is also unusual in that it has four instead of three movements. Maybe not so often recorded, but all the same a prime choice for a top recital, be it for its historical value or for its inherent, emotional aspects. It took Janáček eight years and many revisions before he allowed its final publication in 1922. Here, too, Aitzol can proudly stand up with great personal satisfaction to a few of the best accounts around, displaying a large degree of understanding of the different moods between anxiety, stubbornness and resignation. Never aggressive, but nonetheless clear in expression and straightforward in all its variety.

I’m sure that many will welcome Strauss being combined with the previous two sonatas. It makes for a balanced recital. Crafted in late romantic tradition it compensates for sombre war views and gives the violin and piano accompaniment ample chance to shine. In a competing reading, Thomas Albertus Irnberger Strauss: Violin Concerto & Sonata - Irnberger / Korstick / Sieghart sets down a fine account, but excellent though it is, it’s more about tonal beauty than - in my view - emotional content. In comparison, Aitzol takes his time to better underscore the romantic value in a perfectly shaped first movement, followed by a series of sensitively singing variations in the Andante Cantabile and a brilliant apotheosis in the final movement.

In the final analysis it should be taken into account that Enrique Bagaria is a perfect supporter allowing enough room for Aizol to excel, and also, and certainly not in the least, that recordings from Eudora are always made at the highest resolution, with the best equipment and greatest musical care.

Through very fortunate circumstances, I had an opportunity to audition this fine recording. I agree with Adrian’s assessment, and would add that my ‘base’ performance of the Debussy violin sonata, upon which I judge others, is by the Boston Symphony Chamber Players with Michael Tilson Thomas at the piano. On Pentatone RQR SACD. These new interpretations are entirely idiomatic and well conceived.