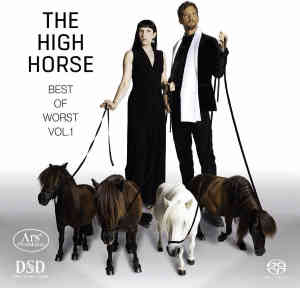 When was the last time you heard an album of classical art songs that made you laugh out loud and compelled you to think about the nature of the music at the same time? This remarkable disc revives the nearly lost art of satiric pastiche, and will provide the listener with much to enjoy on multiple levels.

The premise of the album:

If you went to dance clubs in the 1980s and 1990s, you would have heard Eurodance hits by the likes of Eiffel 65, Right Said Fred, Reel 2 Real, Desireless….

And if you were a conservatory-trained mezzo-soprano, you might have wondered, in the early hours of the morning after a night of clubbing, if you could somehow use that musical training to reinterpret those songs.

Swiss artists, mezzo-soprano Stephanie Szanto and pianist Simon Bucher, collectively known as The High Horse, who have successful careers in the classical and new music spheres, purposively smash the wall that divides pop and classical music genres. The resulting album, "Best of the Worst Vol. 1" which on casual listening could be mistaken for a humorous mashup of well-known classical themes and Eurodance song lyrics, reveals on closer listening a carefully conceived project that illustrates how music performers and listeners alike are culturally conditioned to differentiate between high and low art.

Some of the classical themes deployed by pianist Bucher — Gershwin‘s "Rhapsody in Blue" and Strauss’s "Also Sprach Zarathustra" — have been woven into the mainstream cultural tapestry through overexposure in movie soundtracks and TV commercials, to the point of becoming clichés. Drawing the listener's attention to that issue by juxtaposing familiar classical themes with pop song lyrics shines new light on those categories and valuations. The inclusion of the rock band Queen's song "Bicycle Race" is especially poignant, because singer-songwriter Freddie Mercury had sought to break down those distinctions, to share with a wider pop music audience the beauty and intricacy of classical music-style arrangements.

There is a current of theatrical satire in Swiss culture that flows out of a healthy disrespect for pomposity. Stephanie Szanto described (in English) the genesis and intent of the project at a TEDx forum in Bern, Switzerland (https://www.youtube.com/watch?v=NcmaimW7jng). Szanto explained that the practice of classical music could be creatively confining: "I sometimes struggled with the side-effects of classical music. I missed the irony, the creation itself, and the space for humor."

With skillful and subtle vocal shadings, and inventive melodic reinterpretations, Szanto opens that space both for herself as an artist, and for the receptive listener. She approaches "Best of the Worst Vol. 1" with the same concentration and commitment required for a successful performance of classical lieder. Pianist Bucher, an in-demand chamber music accompanist and recording artist, is the perfect foil for Szanto; they are well-matched partners who strike a balance between the outrageous and the sublime.

An example of the latter is "Voyage, voyage", a 1986 hit composed by French songwriters Dominique Albert Dubois and Jean-Michel Rivat. In place of the original synth-pop dance production, a fin-de-siècle art song concept frames Szanto's expressive vocal interpretation over the background of Bucher's lush piano arrangement. Like many of the performances in the set, "Voyage, voyage" calls into question the dichotomy of popular art vs. fine art by conveying the beauty of the melody and lyrics without condescension.

The High Horse: Best of Worst, Vol. 1 is a labor of love by all participants, and should be enjoyed in the spirit of irony, humor, discovery and creation.