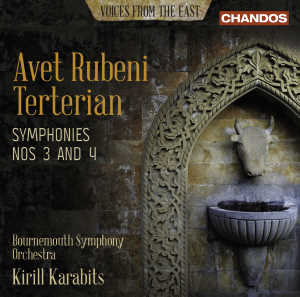 
In his homeland, Avet Terterian is regarded, alongside Aram Khachaturian, as the other giant of twentieth-century Armenian music, and as the founder of his nation’s progressive school of composers.

Born in July 1929, Terterian began his musical education at the Baku Music College. Returning to his native country, he studied at the Komitas State Conservatory in Yerevan, latterly becoming a composition pupil of Edvard Mirzoian. His early works follow in the tradition of Khachaturian. From his opera The Ring of Fire (1967) onwards, he developed an advanced musical language embracing atonality, chance elements, and electronics. Another significant influence was the music of Giya Kancheli, and important, too, was the way in which he absorbed aspects of Armenian folk and ancient liturgical music into his personal voice. The backbone of Terterian’s achievement is enshrined in his eight symphonies. In summing them up he wrote: ‘We are all living on the threshold of a terrible apocalyptic judgement. It has always seemed to me that my symphonies are a cry of the soul for salvation and for the forgiveness of sins.’

Local (to me) orchestra and life long supporter maybe but I just do not know what to make of this recording. Not even my compulsive completist appetite for SA-CD recordings seems willing to add this one to my library. I find excerpts on Presto incredibly dreary to listen to.

Anybody else fired up by this stuff?

This is an excellent innovative recording. Due to the uniqueness between occident, orient and modernity these are unusual compositions.
In my opinion this SACD delivers outstanding surround sound.

Kirill Karabits is to leave his post as Chief Conductor of the BSO at the end of this season. He will be appointed Conductor Emeritus but in effect his 15 year tenure at the helm of the BSO will come to an end. During his time in the UK he has raised the performance level and visibility of the BSO to unprecedented heights and he leaves as his legacy an ensemble bordering on world class.

A great pity then that the orchestra's management did not see fit to record far more of this talented maestro's performances than the few obscure and easily overlooked "eastern" works that grace the SACD catalogue.