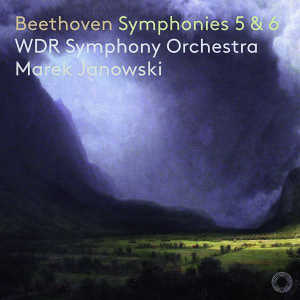 
TWO SIDES OF BEETHOVEN’S MUSICAL PERSONA
Maestro Marek Janowski and the WDR Symphony Orchestra present Beethoven’s Fifth and Sixth symphonies. Premiered during the same concert in 1808, these two symphonies present two sides of Beethoven’s musical persona. Whereas the Fifth is legendary for its drama and forward urge the “Pastoral” Sixth offers idyllic sounds, albeit shortly interrupted by a thunderstorm that resembles the tempestuous development of the Fifth. Programmed together, these two pieces constitute a fascinating portrait of Beethoven at the height of his creative powers.

Marek Janowski is one of the most celebrated conductors of our times, and enjoys a vast PENTATONE discography, including complete recordings of Bruckner’s symphonies and Wagner’s mature operas. This is his second PENTATONE collaboration with the WDR Symphony Orchestra, one of the most established radio orchestras of Germany.

Yes, Beethoven Anniversary Year is coming, but why on earth to record these two symphonies that both have been recorded hundreds of times?! And the recording is not even DSD, just PCM... It’s wonderful music yes, but sometimes even that is not a sufficient justification. Frankly speaking it’s really demanding to understand Pentatone’s decision behind this release...

They also have a recording of the 5th & 7th by Andrew Manze coming in January. A lot of collectors and critics complain about too much Beethoven, Mozart, Mahler and Bruckner. I feel the same way about Bernstein and Karajan reissues.

That said, I suspect you are correct that it's about the 250th birthday, but, then again, it could just be a matter of economics. New classical fans are "born" all the time, and lots of them, like salmon, go through the usual cycle from Vivaldi to Mahler before they ever get interested in more esoteric repertoire.

It's their company, and they can record what they like, even if it's Gordon Getty. They certainly do a great job with most of their releases, and sometimes they come up with some real surprises, like their disc of Martinu double concertos. I find myself buying more discs from BIS, Chandos & Ondine these days, but I still keep an eye on what's coming up on Pentatone.

As 2022 will be his 200th birthday, it'd sure be nice if they got Janowski to have a go at Raff's 5th symphony. That's probably just magical thinking, though.

It probably isn’t even PCM 96/24: ‘Sorry, this file type is not available for download due to the recording quality’.

There's a "PCM HI-RES" logo on the inlay card, whatever that implies. Presto has the download in MP3 and FLAC (CD quality, 44.1 kHz, 16 bit). There's also a logo on the back that says, "WDR: The Cologne Broadcasts," so maybe, as it sometimes happens with Chandos & BIS, this recording didn't start out life with the intention of becoming a Pentatone release.

I have a copy out there in the post somewhere. Early reviews I've seen had pretty divergent opinions.

If you've ordered the new, two disc set of Beethoven piano concertos by Inon Barnatan, Alan Gilbert and the Academy of St. Martin in the Fields, you're going to be even more puzzled. It is on standard CDs! When I preordered it, it never even occurred to me that it wouldn't be on SACD. I certainly hope that all this doesn't mean Pentatone are starting to phase out their high resolution efforts.

That would be heart breaking !

Just checked the Pentatone site front page, and out of 7 "latest releases", only 3 are SACD, and only 2 of them - Nutcracker and Freischutz - are DSD. So it does look as if Pentatone have changed course by stealth in terms of physical releases. A few upcoming releases are listed under "Release Planning" but there is no detail of format etc. there. What a shame - thank heavens for Robert!

Hard to understand why they are doing this as surely adding a few CD sales to their SACD sales isn't going to transform their business for physical media. So what are they offering one wonders as they have gone to great lengths - and quite justifiably so - to emphasise the sheer sonic excellence of their DSD recorded SACD?

It kinda suggest that they are knowingly and (arguably) cynically offering an inferior product to the less discerning buyer who perhaps wouldn't know the difference between a baked or poached egg ...but again surely those sort of people would be streaming anyway?

The DSD recording decision is not always a choice over which Pentatone have control. Much depends on where recordings are made, wether they are live or studio and the need to work with the venue's own recording arrangements that are likely to have been in place for many years for radio broadcasts etc.

I would like Pentatone to know is that in my case, any new recording on their label goes straight onto my "wish list" but if the 'PCM recorded" light flashes up then I usually reconsider the merits or need for yet another version of the particular repertoire.

Oddly, or coincidentally, Berkshire Record Outlet currently has lots of Pentatone SACDs listed at $6.99. (They also have tons of Hyperion CDs, including recent releases for $8.99.)