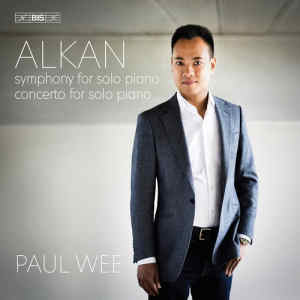 
Charles-Valentin Alkan made his name as pianist in nineteenth-century Paris and seemed poised for a glittering career. But following a series of setbacks he withdrew into a life of relative seclusion, and as he receded from the public eye, so too did his music. It was never entirely forgotten, but it was not until the 1960s and 1970s that Alkan’s works began to emerge from obscurity. To quote the liner notes by Paul Wee, ‘Alkan’s music exhibits a formidable grasp of form and structure, a strong command of melody, a high sense of drama and an unprecedented exploitation of the capabilities of the piano.’

Combined here on one disc – possibly for the first time – are the Symphony and the Concerto for Solo Piano, two pinnacles of Alkan’s legacy. Unusually, the four movements of the Symphony and the three movements of the Concerto are included as seven études within Alkan’s Douze Études dans tous les tons mineurs (Twelve studies in all the minor keys), in 1857 as his Op. 39. As to why Alkan composed these epic works and then hid them away in a set of études, Wee suggests that they are to be seen as ‘a celebration of the piano and its capabilities.’

Paul Wee is a barrister specialising in commercial law and appears regularly before courts and tribunals on behalf of clients including governments, corporations, financial institutions and individuals. Born in Australia, he began his piano studies at the age of four, continuing them in New York City at the Manhattan School of Music. Going on to study law at the University of Oxford, he attempts to balance his love for the piano alongside the demands of a busy international career in law.

Very little of Alkan's music has made it to SACD thus far. With this disc, BIS has given us the two best segments of his massive set of Etudes, Op.39. There's over 78 minutes of incredible piano music on this very well recorded SACD.

On RBCD, Marc-Andre Hamelin (Hyperion) is supreme in this repertoire. Jack Gibbons (ASV, deleted) is phenomenal, too, if you can find (or afford) it. I'd rank Wee slightly below Gibbons and a bit above Vincenzo Maltempo (Piano Classics/Brilliant Classics). They are all fully worthy of owning.

If you are unfamiliar with Alkan, you may well be stunned when you hear this disc. Reviewers and annotators make much of Alkan's personal and musical eccentricity, but I find it incredibly accessible, tuneful and exciting. After hearing Alkan, I found Liszt and Chopin to be boring by comparison.

My advice would be to buy it now and play it loud.

I have the Gibbons and Hamelin recordings. Great as they are, Wee buries them. He has it all: limitless technique, clarity, insight, expression. BIS furnishes him phenomenal sonics. These are benchmark recordings for both works. Were I still writing for ARG, this would top my critic's list.

The packaging sucks. It is a cheap flimsy digipak unworthy of Wee's magesterial pianism. Bissie: go back to jewel boxes and quit insulting your artists. Cheap digipaks won't allow you to control the Earth's climate.