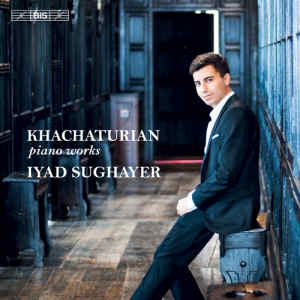 
Born in 1903, Aram Khachaturian became the most significant twentieth-century musical figure in the then Soviet Republic of Armenia. Many of his most important works date from the first half of his career. The expressive immediacy of his music, conditioned by his Armenian heritage with its sensuous melodic writing, its vibrant orchestration and rhythmic drive – all resulted in a popularity equalled by few composers of his generation. Although he is primarily associated with large orchestral scores – including the ballets Gayaneh and Spartacus, perennial favourites with concert audiences – he also left a number of works for piano solo.

For his début disc, the Jordanian-Palestinian pianist Iyad Sughayer has put together a recital spanning from the ample and demanding Sonata to the delightful Children’s Album, consisting of ten miniatures, in turn playful and poignant. The recital closes with a piece which did a great deal to establish Khachaturian’s name near the outset of his international career. Composed in 1932 (allegedly in a single evening), the Toccata in E flat minor soon established itself among the showpieces of the modern repertoire and was to become a calling-card for aspiring virtuosi. Iyad Sughayer was born in 1993 in Amman, where he received his early training. He is currently based in the UK.