The Stereo Saond disc is much worse than Esoteric's. The sound is thinner, it lacks body. Esoteric's sounds much more natural. My Stereo Saund record is going to ebay soon. 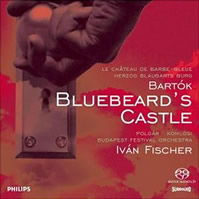 If you've ever wondered what Ivan Fischer sounds like speaking, then track 1 provides an answer!

Bluebeard is sung here by László Polgár who is in much better voice early on than Ildikó Komlósi as Judith whose opening phrase is particularly hard on the ears. Fortunately things quickly even up and Komlósi soon loses the grating and squall-like quality to her voice.

Throughout the orchestral contributions are marvellous as per usual from this team (have they made a bad recording?) and the pacing points up the dramatic points well, such as in Judith's first demands to open the doors (about 8'30 on track 2). In particular the build up to the 5th door being opened is riveting with a real blaze of orchestral glory upon its opening (and a stunning cry from Komlósi) with the extra brass really telling. The dark mood is consistently well captured and is unrelenting in its bleakness. Equally though (and essentially) the BFO & Fischer give the "brighter" moments dazzling renditions to prevent the score from being too disturbing (such as the gems on track 5 and the opening of the garden door on track 6). The skeletal keyboard xylophone is really chilling in the torture chamber episode (for those that don't know the story, this is not the nicest castle ever to feature in opera!) After the towering climax of the 5th door being opened, the performance winds down successfully , returning to the darkness of the opening.

Like Fischer's other recordings for Philips, this was recorded by that amazing team from Polyhymnia International so we have that to thank for the DSD master-tape. As one would expect it has the Polyhymnia "house" sound and as such, a little more presence from the rears than the Channel Classics now afford the BFO & Fischer. Throughout the recording it is excellent, with the sounds creeping (appropriately) out of an aural blackness.

Highly recommended with only the occasional lapse from Komlósi to mar an otherwise exceptional recording of a fantastic piece played, conducted and sung very well.