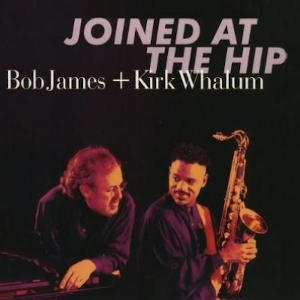 
Back in 1996, pianist Bob James and saxophonist Kirk Whalum - two of the biggest names in contemporary jazz - combined their talents on the acclaimed Warner Bros, album, Joined At The Hip. Containing two previously unreleased full versions of “Out of the Cold’ and “Deja Blue” this iconic album remastered and reissued as a SACD release by evosound. Backed by a slick band comprised of guitarist Jeff golub, bassist Chris Walker, and drummer, Billy Kilson, the pair served up some fine original material - including Whalum’s evocative tone poem, “Soweto” - and jazzed-up reamps of two big ‘70s hits: Maria Muldaur’s “Midnight At The Oasis”and Donny Hathaway’s “The Ghetto.”

Though it was nominated for a Grammy and peaked at No. 10 in Billboard’s jazz charts, Joined At The Hip has often been overlooked and remains an important musical touchstone in both artist’s careers. The album’s 16 page booklet includes new liner notes featuring reminiscences from James, Whalum and the session’s original sound engineer, Ken Freeman. The original high resolution audio mixes were used for the DSD remastering. This stereo hybrid SACD plays back on both SACD and regular CD players. Simultaneously also releasing on MQA-CD & Hi- Res Audio.

I can recommend this CD I bought the MQA version rather than the SACD. After listening to several A B tests in two channel stereo recordings I and my audiophile friends could not pick the SACD vs the MQA in one instance [ Bill Evans "Profile" album ] the consensus was that the MQA actually sounded better that the SACD ! And importantly the MQA is $10.00 - $15.00 cheaper than the SACD version !