I thought it was well known that BIS recorded in 24 bit/44.1hz sample rate for years and years prior to about 10 years or so ago when they were able to record in 96hz. sample ...

The old SACD.net site included some comments to the effect that this recording had some problems. I'm afraid I can't understand why anyone should think so. The performances ... 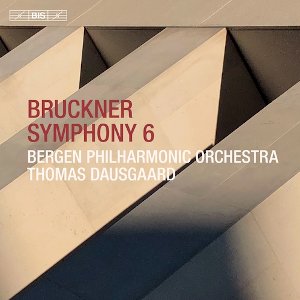 
Anton Bruckner wrote his Symphony No. 6 over a period of two years, completing it in September 1881. And for once with this composer, the word ‘completing’ can be used without qualification: known for his habit of reworking and revising his works, Bruckner for once seems to have been satisfied with the result of his efforts. That doesn’t mean that the Sixth has enjoyed a smoother passage to the concert stage than other Bruckner symphonies, however: The only performance in Bruckner’s lifetime was a partial one, of the two middle movements, and when Gustav Mahler conducted the first ‘full’ performance in 1899, he made a number of substantial cuts and other amendments.

In fact, the true premiere of the Sixth as Bruckner wrote it had to wait until 1935, almost 40 years after the composer’s death. And the work is still something of a Cinderella in the Bruckner catalogue, with far fewer outings in concert halls or on disc than for instance the Fourth or the Seventh. Bruckner called the Sixth his ‘boldest’ symphony – with a duration of ‘only’ some 55 minutes it is at any rate one of the shorter, but possibly the composer was rather thinking of the remarkably expansive Adagio or the ambiguous Scherzo, or of the way the so-called ‘Bruckner rhythm’ (different combinations of a duplet and a triplet) pervades the work. The present disc is the first in a Bruckner ‘mini-series’ from Thomas Dausgaard and the Bergen Philharmonic Orchestra, appearing together on disc for the first time.

Dausgaard's Bruckner credentials have already been established by his superb Bruckner 2 with his usual band - really one of his very best records, and my own Bruckner 2 of choice. Very highly recommended indeed.

This arrived earlier today in mail, ordered directly from the BIS Online Store. Up to this point I have listened to it once although only in stereo. My first impression was a positive one; performance is wisely prepared with a warmly welcomed sense of flowing and naturalness. Dausgaard just let the music to move along lightly without forcing it. Tempo choices are somewhat fast-paced, so forget the so-called Brucknerian 'Gothic Cathedral with heavenly atmosphere'.

The recording, which was made in June 2018 at the Grieg Hall, Bergen, (24-bit / 96 kHz) does a full justice to Bruckner’s rich and sonorous orchestration. At the same time there is a pleasant amount of resonance and reverb, air around the main soundfield, providing carefully crafted virtual seating position for the listener, even when listening in stereo! So it’s recommend and I’m curious to see what the ”further Bruckner installments to come” from this team will be, as advertised on eClassical...