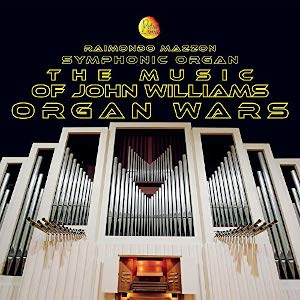 Music from Jaws, Close Encounters of the Third Kind, Star Wars saga, Superman, Schindler's List, Memoirs of a Geisha, Empire of the Sun (all arr. Castania)


John Williams, among the greatest soundtrack composers, is for sure also one of the most refined contemporary orchestrators. Here now the challenge of shifting the pages of well-known movies such as Jaws, Close Encounters of the third kind, Memoirs of a Geisha, Schindler's List till actual cult movies of the cinema: Star Wars and The Empire Strikes Back from the orchestra to an instrument like the organ.

And I underline he is not using an ordinary organ, but the grand organ of the Auditorium "Cesare Pollini", in the premises of Padua Music Conservatory. A really unique repertory, that allows to make the most of all the registers of this instrument, from pianissimo to the symphonic "tutti", considering that we chose to give room to John Williams’ various musical languages, from the most celebrative and epic to the more intimist and meditative, in order to please the taste of those who know the more blockbuster Williams, but also who know or wish to deepen the knowledge of a less known but nevertheless brilliant Williams.