There are a number of distinguished conductor-composers whose eminence as interpreters of the music of others has sometimes overshadowed their own compositional achievements. Furtwängler, Klemperer, Weingartner and Dorati are just a few who come to mind and Sir Eugene Goossens (1893-1962) certainly falls into that category.

Goossens’ considerable body of work, that includes orchestral, choral, chamber and instrumental compositions as well as two operas, has over the years been rather sparsely represented on disc; though back in the 1990s, Vernon Handley recorded a three CD Goossens survey with three different Australian orchestras that did justice to his output and brought the composer to greater prominence, on disc if not in the concert hall.

Chandos have certainly done the composer proud with their on-going series of Goossens’ Orchestral Works performed by the Melbourne Symphony Orchestra – first under the direction of the late Richard Hickox and more recently Sir Andrew Davis. This latest disc (Vol.3) contains two major works written in the 1940s – the ‘Phantasy Concerto for Violin and Orchestra Op 63’ and the ‘Symphony No.2 Op.62.

This would appear to be the first commercial recording of the Phantasy Concerto for Violin and Orchestra Op 63’ though nowhere in the liner notes do Chandos claim this to be the case. The work was composed 1946-48 for Jascha Heifetz who rejected it possibly on the grounds that it did not offer sufficient opportunity for technical display and it remained unperformed. Its premiere eventually took place in 1958, after some revision by the composer, in a BBC broadcast with a young British violinist Tessa Robbins as soloist. Robbins performed the concerto at a Proms concert in 1960 but it has not been heard since until this recording.

It would be hard to over praise the magnificent performance recorded here by Tasmin Little. In the rhapsodic opening movement with its many contrasting episodes her burnished tone does full justice to the impassioned writing while the lyrical sections of the work are delivered with a lithe eloquence. In the scherzo and the sprightly Spanish inspired finale Little’s rhythmically taut playing and lithe effortless virtuosity is a delight. Davis and his accomplished orchestra revel in the opportunities Goossens offers, while the warm yet richly detailed recording from the Chandos Australian team could hardly be bettered. Those who enjoy the violin concertos of say Walton, Prokofiev and Stravinsky are likely to find this work very much to their taste.

The Symphony was composed in America between 1943 and 1945 and while not overtly a ‘war symphony’ it does appear to reflect the anxiety of the times. The introduction to the first movement begins with a lugubrious bassoon theme that imparts a sense of foreboding while the main body of the movement is turbulent and often dissonant, but with some calmer reflective passages.
Though the slow movement uses the folksong ‘The Turtle Dove’ enhanced by the fluency and crystalline clarity of the scoring, a sense of unease is ever present and the music builds to a tempestuous climax that shatters any feeling of pastoral calm. Biting rhythms, pizzicato strings and side drum interjections impart a militaristic feel to the brilliantly orchestrated scherzo while the finale returns to the grim and tempestuous mood of the Symphony’s opening. This is not an easy work to assimilate after only a few hearings, but it is clear that, thanks to the superb playing of the Melbourne Symphony and the committed advocacy of Andrew Davis, this thorny piece is without doubt worth investigation for the adventurous.

Typically well researched and informative liner notes by Lewis Foreman enhance the enjoyment of a most worthwhile release. 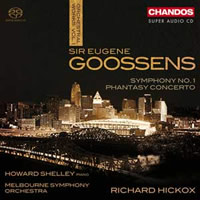 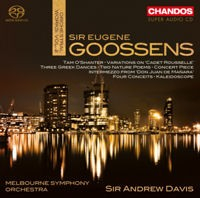