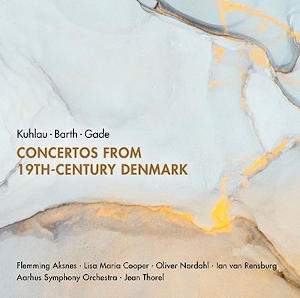 
It was in the 19th century that Danish art seriously flourished and flourished. The Aarhus Symphony Orchestra's own soloists perform here in fine concert works from 19th century Denmark. Featuring music by two composers who are experiencing a renaissance and one that still tempts life into oblivion. From the splendor of Kuhlaus Ouverture to William Shakespeare and his extremely well-formed Concertino for two horns, the fresh, singing qualities of Gades Capriccio and finally the world premiere at Barth's Obo Concerto.