In 1799, after having made a name for himself with major compositions in the genres of the piano trio, piano sonata, violin sonata, and string quartet, but before finishing his first symphony, Beethoven wrote a work for mixed strings and winds. This piece, the Septet op. 20, would become one of his most popular compositions, with a large number of arrangements, including the one for piano trio on this disc. The form is clearly related to the divertimenti by Mozart, with six movements that alternate fast and slow tempos.

The appearance of the Triple Concerto on the final disc in this series might surprise some listeners, as it is the only work with orchestra, but this composition has more in common with chamber music than with concertos. It was written in 1805, and its instrumentation is highly exceptional if not unprecedented altogether.

In tone, it is rather a stark contrast from Beethoven’s other concertos, which generally contain easily recognisable melodies and strikingly rhythmic material, neither of which are found to a great degree here. Furthermore, the opposition of soloist and orchestra, a central aspect of many solo works with orchestra written up until that point that was the engine behind much of the drama, is also absent, with the orchestra taking a largely subservient role to the three soloists. So, although the work was called a ‘Grand Concerto Concertant’ when it was published, it really has very little in common with other works with a similar title.

The question is whether this piece is a concerto at all, or whether it could be more fruitfully played and judged as a different kind of experimental piece in a more collaborative genre. This disc takes the latter approach, and by contextualising it in a series of piano trios, it presents this work as Beethoven’s most richly instrumented chamber music.

Some might have thought this survey of Beethoven’s piano trios completed with Volume 4, covering all 7 ‘regular’ trios, plus the two without opus numbers (WoO 38 and 39), the variations op. 44 and the ‘Schneider Kakadu’, Op. 121a, totaling the 11 usually taken as a complete set, like the Grammy Award-winning Perlman/Harrell/Ashkenazy set (Warner Classics Release Date: 28th Aug 2015 Catalogue No: 2564612987). The Van Baerle Trio went even a step further by adding the transcription of Symphony number 2, and the Allegretto, Hess 48, like some other complete sets have done, too.

‘Complete’ is sometimes a difficult to define notion, especially with regard to the repertoire of the great classical composers. It often depends on whether to include works or transcriptions of which the authenticity is open to debate amongst scholars. Steering clear of such considerations, Volume 5 concludes the series with Beethoven’s own transcription of his popular Septet Op. 20 and - with a brilliant streak of magic thinking, so it seems to me - Beethoven’s Triple Concerto Op. 56, described in the liner notes as “Beethoven’s most richly instrumented chamber music”.

However, there remains a question mark as to the ultimate completeness of Beethoven’s Piano Trios, because further scrutiny brings to light the one published as Op. 63, a transcription of (or having been modelled on) a combination of Beethoven’s String Quintet Op. 4 and Wind Octet Op. 103; an early Piano Trio in D Major, Kinsky - Halm Anhang 3, as well as the recently rediscovered Piano Trio in E-Flat Major, Hess 47, which, according to at least one scholar, is: “an original reworking, by Beethoven himself, of his String Trio, Op. 3”, though others have shed doubt on its authenticity. For those wanting to learn more: All three have been recorded by The Beethoven Project Trio as ‘World Recordings’ and released in 2010 on the Cedille label (CDR90000118). Extensive and informative programme notes can be found at Cedille’s web site. Perhaps an idea to add a Volume 6?

In the meantime, we should be more than content with which is now on offer: A set of piano trios including a Symphony Concertante as a super bonus.

It may be recalled that Jan Willem de Vriend has recorded the ‘Triple Concerto’ once before with the Netherlands Symphony Orchestra (released by Challenge Classics in 2013) featuring the Storioni Trio. This was for me an ear-opener. Listening to this version I was as pleased as John Miller as expressed in his review on HRAudio.net: Beethoven: Triple Concerto, Piano Trio No. 7 - Storioni Trio / de Vriend. I’ve never been a great advocate of It, but quite frankly, de Vriend’s approach to the score was the first time that I really appreciated a performance of this concerto. The secret probably lies in the way he handles it: Like said above, as an extended chamber work, resulting in a different, and as far as I’m concerned, more palpable interpretation than the usual, often overblown and sometimes even awkward accounts, irrespective of orchestras and soloists of fame.

Given the same conductor, one would have thought that the timings of both versions would be similar. This is only partly the case, as we will see later on. But what is, is the attractive treatment of the material with either orchestra and soloist team: The concise and well-measured orchestral balance, also in relation to the soloists, the precise and polished strings, as well as the ‘natural’ brass, to be heard in both.

There are differences though. The older one has the more modest, period instrumented trio partnered with a hybrid modern ‘historically informed practice’ orchestra, conveying a sense of intimacy, notwithstanding rattling sticks on the tympany, culminating in a beautifully sculpted middle movement, which takes close to 20 percent longer than the same movement in the newer account.

That said we must give credit to de Vriend having managed to get the same hybrid sound from The Residentie Orkest The Hague, of which he only partly stood at the helm (from 2015 – 2019), sharing this position with Nicolas Collon for different repertoire. But, the larger orchestral complement, and Hannes Minnaar playing a far more powerful Chris Maene Straight Strung Concert Grand CM17003 than the 1815 Lagrasse fortepiano of Bart van de Roer, lends this performance a richer body, taking away some its chamber-like intimacy. However, some may prefer such a weightier approach. All a matter of taste.

The sweetest cherry in the hamper is no doubt the transcription of Septet Op. 20 for piano trio, in which, by the way, the violin can be replaced by a clarinet. For reasons explained in the well documented and well-written liner notes the transcription was done by the Master himself, and that can be heard! Nothing of its original quality gets lost. Better still: It gets a fair dose of extra emotional weight.

Here, the members of the Van Baerle Trio, are at their best and clearly at ease on their home turf, displaying the same homogeneity as in previous releases. Minnaar takes plenty of room to let the beauty of Chris Maene’s Straight Strung Concert Grand shine, whilst adequately supporting Maria Milstein, playing an original violin by Michel Angelo Bergonzi, and Gideon den Herder, playing a ditto cello by Giuseppe dall‘Aglio, though both with modern strings.

They give a reading that lets the audience join in the deeper meaning Beethoven no doubt wanted to convey to his violinist friend and specialist in the field of hearing, desperately hoping that such a dedicated transcription would be met with a cure to overcome his loss of hearing. A far cry from the light-hearted wind sextet. Beautifully shaped sensitively played!

Recorded and mastered by Bert van der Wolf and his top-of-the-range Northstar Recording Services bv equipment, the listener gets the best of what the acoustics of the respective recording venues allow: Atrium City Hall The Hague (Triple Concerto), one of the two temporary concert Halls of the Residentie Orkest, and the internationally well-known and appreciated Studio 1 of the Dutch Radio, Hilversum (Trio Op. 38).

Taken all 5 volumes together, the Van Baerle Trio has set down a survey that can easily measure up to other top sets, no matter how complete they may be, with this one having the additional advantage of great sound, the inclusion of a superbly played Septet Op. 20 transcription, and last but not least a remarkable account of the ‘Triple Concerto’. So, why not go for it! 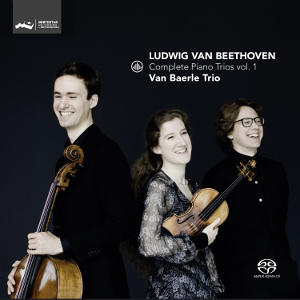 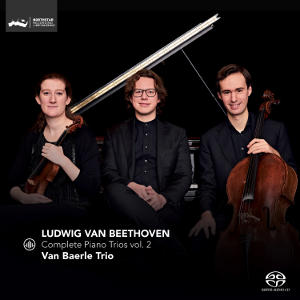 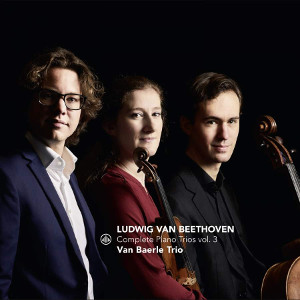 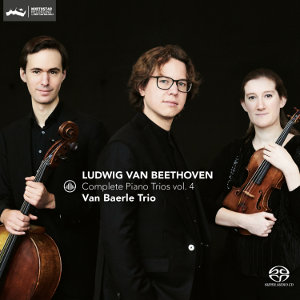